Rebel command insignia,[1] also known as Rebel Rank Insignia[2] and simply command insignia,[3] were badges of military rank used by officers of the Rebel Alliance military and the later New Republic military. The badges utilized by the Alliance members at the Battle of Yavin and the Battle of Hoth consisted of a series of colored pips that were raised from the surface of a square chrome plaque. These badges were usually worn over the right breast of the service uniform. Starfighter pilots were sometimes seen wearing metal or cloth badges of similar design on their shoulders instead.

Parallel to these most distinctive Alliance rank insignias were a totally different style of chest and collar insignia. These insignia were grey, metallic and technical in appearance, and were seen worn by some Army and Special Forces officers.

The Alliance was in its early years spread across the galaxy and consisted of more or less independent cells. This meant that uniforms, equipment and rank insignias were hard to standardize. Much of the equipment used by the Alliance was donated or by other means acquired from various civil and military organizations. The planet of Alderaan and the Royal House of Alderaan were notable contributors to the rebellion. Many Alliance officers and troopers could be seen wearing the distinct uniforms and rank insignias of Alderaanian forces, even though they were not commanded or lead by Alderaan. 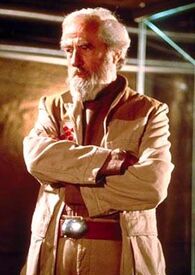 General Jan Dodonna with one style of rank insignia in 0 BBY. 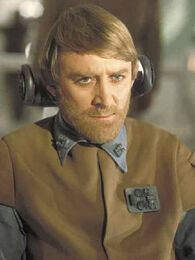 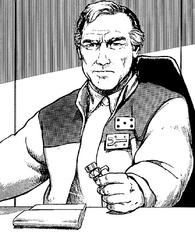 General Airen Cracken wore both styles in 7 ABY.
Add a photo to this gallery

After the Destruction of Alderaan, or perhaps because of it, many units of the Alliance and later the New Republic seemed to favor Alderaanian style rank plaques. Seen across the galaxy and across units, some differences in design and color were present. Even the number of colored pips symbolizing a specific rank could vary from unit to unit. There were many consistencies though. Army and Starfighter officers mostly wore red or golden pips in their insignia, while fleet officers mostly wore blue pips. The general and admiral rank was also mostly shown by 5 pips. The commander rank was mostly shown with 3 pips. A captain could wear insignia with the number of pips ranging from 2 to 5. It must be taken take into account that the Alliance, like many other militaries, had a wide range of ranks and functions that could be addressed, regardless of the true rank, as admiral/general, commander or captain. 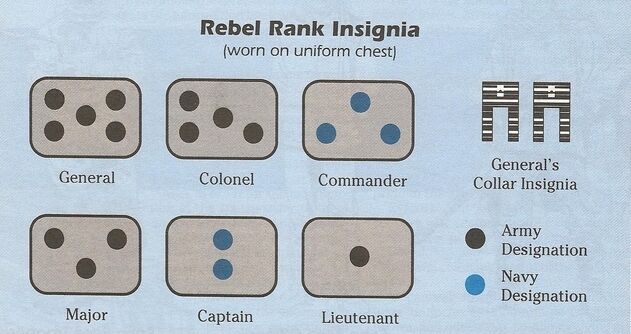 Many of the Rebel soldiers stationed at Echo Base on Hoth wore cloth grid patterned patches on their right shoulders. These patches were colored differently from person to person, but the majority of the infantry troops as well as the indoor technicians wore the same patches. It is possible that these patches were a form of rank insignia. Mostly it was personnel of lower rank who wore this kind of insignia instead of the officers' normal metal chrome plaques. But as exceptions to the rule there were a few officers, even Commander Luke Skywalker, who wore them. Skywalker was the only officer who wore both the standard officer's insignia in conjunction with the cloth sleeve patch.

In the first-person PC shooter game Jedi Knight: Mysteries of the Sith, an officer who is addressed as "commander", wears an insignia with 9 red pips. The game is set in the year 10 ABY, which is well into the time age of the New Republic. It is unknown if this "commander" held a high military rank similar to sector commander, or if he was just address to as an officer commanding his forces.

Retrieved from "https://starwars.fandom.com/wiki/Rebel_command_insignia/Legends?oldid=9661013"
Community content is available under CC-BY-SA unless otherwise noted.