Rehtul Minnau was on Naboo during the Battle of Naboo. He was the older brother of Nandi and Teckla Minnau and worked as a law clerk in the city of Theed. 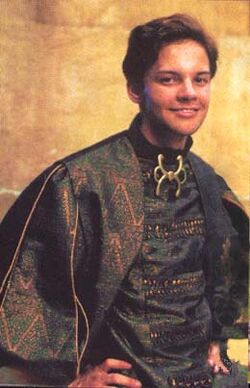 This character originates from a cameo played by Nathan Hamill, who came up with name Rehtul Minnau. Leland Chee initially said that there was no official name for this character.[1] However, Star Wars Hyperspace member Evan Burger inserted the name in his What's the Story? entry on Teckla Minnau, finally placing the name in canon, though Minnau has not yet been fixed as the same character as Hamill's.

Retrieved from "https://starwars.fandom.com/wiki/Rehtul_Minnau?oldid=2238290"
Community content is available under CC-BY-SA unless otherwise noted.