View source
watch 02:24
Wiki Targeted (Entertainment)
Do you like this video?
Play Sound

Alliance to Restore the Republic[1]

Santa Claus was a festively dressed, probable member of the Rebel Alliance stationed on the cruiser Independence.[1]

A member of the same species as the Jedi Master Yoda was known to have donned regalia similar to Claus's distinctive outfit on at least one occasion.[2]

In 3963 BBY, Santa or a being dressed as him was located at Goodvalor's Little Bivoli.[3]

In the Star Wars: X-Wing computer game, when the date is set to December 25 in the Collector's CD-ROM version, Santa Claus appears on the Independence concourse menu.[1]

In LEGO Star Wars II, entering the codes "CL4U5H" and "TYH319" at the Mos Eisley Cantina and activating Disguise 3 in the Extras menu allows you to create a Santa-like in the character customizer.[4] This character is identified as Santa Claus in a StarWars.com news item.[5]

In 2006, a limited-edition figurine was issued of Yoda dressed in a Santa suit with a sack of toys.

Claus' son, "S. Claus," appears at the end of the album Christmas in the Stars.[6]

A number of Lego sets in the "Star Wars Advent Calendar" line have characters dressed as Santa Claus.[7][8][9] 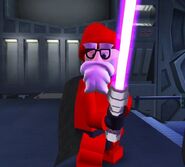 Yoda, or another member of his species, dressed like Santa Claus 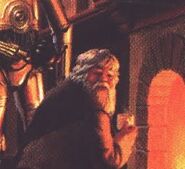