Edit
watch 06:43
"The Last Jedi" Deleted Scenes Breakdown
Do you like this video?
Play Sound

This is a partial list of scenes (some filmed, some in animatic form or merely considered) that weren't included in any version of the canon films or TV series. Some scenes were cut due to time constraints, some didn't fit into the flow of the story, and others are simply alternative angles that have yet to be used. Deleted scenes for the prequel trilogy were featured on the second disc of their original DVD release, but most of the original trilogy deleted scenes weren't released until the 2011 Blu-ray release. Deleted scenes for The Clone Wars were included on the Blu-rays of seasons Two to Five.

Episode I - The Phantom Menace[]

Dawn before the podrace

Episode II - Attack of the Clones[]

Padmé forcefully objects to the Senate's plans to create an army to fight against the Separatist movement.

Anakin and Padmé on Trial

Episode III - Revenge of the Sith[]

A Stirring in the Senate

A Plot to Destroy the Jedi?

A clone trooper in Jedi disguise

"The stuff people talk about, like what they saw in the trailer, they're not scenes you can just put on a DVD. They're moments within scenes and threads, and you pull a thread and it all changes. It was changing the whole time. It's not like there was one version and then there was this other version -- it was like this thing that incrementally evolved constantly through all of postproduction and didn't stop until there was a gun at our heads and we were forced to release the movie."
―Gareth Edwards on the lack of Rogue One deleted scenes[src]

Rogue One required extensive reshoots late in its production. About 45 scenes that were featured in trailers or TV spots did not make it to the final film. According to director Gareth Edwards, these were simply bits and pieces, not entire scenes removed from the film.

Luke next to a moisture vaporator

A creature at Mos Eisley

Watching the skies of Tatooine

Han in the cantina with Jenny

Episode V -The Empire Strikes Back[]

2-1B attends to the dead tauntaun.

Luke Skywalker returns to Echo Base amidst the wreckage of battle.

C-3PO sets a trap for pursuing snowtroopers, leading them into a wampa holding pen in Echo Base.

Episode VI - Return of the Jedi[]

Luke constructing his lightsaber in a cave

Luke hangs above the rancor pit

Leia sitting beside Jabba on the sail barge

Just after Leia's attack on the gunner

Parting ways in the storm 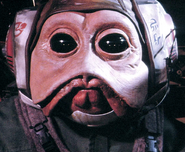