Press the Attack
So Be It is the fourth Force Pack in the Endor cycle for Fantasy Flight Games' Star Wars: The Card Game. It was released on April 7, 2016.

“You underestimate the power of the dark side. If you will not fight, then you will meet your destiny.” –Darth Vader, Star Wars: Return of the Jedi

Massive fleets meet in deadly interstellar battle above the Sanctuary Moon of Endor. A few noble heroes infiltrate the palace of Jabba the Hutt in a desperate attempt to rescue their captured friend. In the darkest places of the galaxy, evil things stir. In So Be It, you can relive some of the most iconic moments of Return of the Jedi.

Like other Force Packs in the Endor cycle, this Force Pack introduces new mission cards to shake up the conflict phase, new fate cards to increase the tension of every edge battle, and new neutral objective sets to expand your deckbuilding options. Here, you'll find iconic characters like Admiral Ackbar and Lando Calrissian in disguise as Tamtel Skreej. Whether you're helping the Empire complete the second Death Star or leading a Rebel assault on the shield generator, So Be It welcomes you into the most thrilling moments of Return of the Jedi. 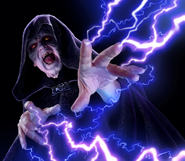