Edit
watch 01:40
Boba Fett Returns - The Loop
Do you like this video?
Play Sound

Star Wars: Attack Squadrons was an online browser-based space combat game in development by Disney Interactive and Area 52 Games. The game was first announced with a teaser trailer on December 17, 2013 with a closed beta that began in January 2014. In May 2014, after five months of beta testing, it was announced that the game was canceled[2] in favor of developing other Star Wars gaming experiences. The game never had an announced release date before its official cancellation.

Star Wars: Attack Squadrons would have featured modifiable ships and up to 16-player matches in 3 modes.[1] There would have been a variety of maps, including one with the Death Star II over Endor. It was also confirmed during development that the game would have used the Unity Game Engine.[3] 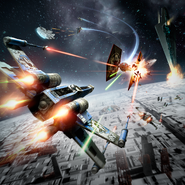