Star Wars: Attack of the Clones: The Ultimate Illustrated Guide

Star Wars: Attack of the Clones:
The Ultimate Illustrated Guide

"Obviously, when the plans about the 3-D movies were changed, we did consider not doing the second book. But I remember visiting a local library and scrolling through their old Star Wars collection and seeing the old, non-expanded version. It was dirty, missing pages, and barely holding together. At that point there was no doubt in my mind: We HAD to publish the expanded version! At least so I could add it to my personal collection."
―Jonas Holm Hansen, Alvilda[src]

The book was originally scheduled to be released in the North American market on June 25, 2013, under the title Star Wars: Attack of the Clones: The Expanded Visual Dictionary to coincide with the 3-D release of the film Star Wars: Episode II Attack of the Clones, but it was canceled following the Disney–Lucasfilm decision to indefinitely postpone the film's release in order to concentrate on the Star Wars sequel trilogy. However, the book was nonetheless released in Denmark by DK's Danish publishing partner, Alvilda, under the foreign-language title Klonernes Angreb: Den Ultimative Illustrerede Guide, which translates to Attack of the Clones: The Ultimate Illustrated Guide. Some of its content was also incorporated into the 2018 reference book Star Wars: The Complete Visual Dictionary, New Edition. 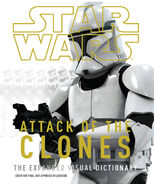