This article is about canon reference book. You may be looking for the short story "All Creatures Great and Small".

Star Wars: Creatures Big & Small is a Star Wars young readers book with a focus on Star Wars creatures. It was released by Disney–Lucasfilm Press on October 1, 2019 and is written by Calliope Glass and Caitlin Kennedy with art by Katie Cook. As with previous releases such as Star Wars: ABC-3PO, the cover bills it as being the "Galactic Basic Edition."[1] 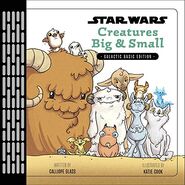 Preliminary cover
Add a photo to this gallery

In other languages
Retrieved from "https://starwars.fandom.com/wiki/Star_Wars:_Creatures_Big_%26_Small?oldid=9256268"
Community content is available under CC-BY-SA unless otherwise noted.