During the Clone Wars[1]

Star Wars: Darth Maul — Son of Dathomir is a trade paperback that collects the four-part comic-book series Star Wars: Darth Maul—Son of Dathomir from author Jeremy Barlow. The collection was originally published by Dark Horse Comics on October 14, 2014, and was republished by Marvel Comics on November 28, 2017. The Marvel edition includes the non-canon comic stories "Hate Leads to Lollipops," "Baby Darth Maul Goes to the Dentist!," and "Baby Darth Maul," which were first published in Dark Horse's Star Wars Tales series.

The Darth Maul — Son of Dathomir comic series is part of the official Star Wars canon but also applies to the non-canon Star Wars Legends continuity. Foreign-language publisher Panini Comics has released the Son of Dathomir trade paperback with the Legends banner in Spanish and Portuguese for Mexico and Brazil, respectively.

Adapted from unproduced screenplays for season 6 of The Clone Wars, this is the final chapter planned in Darth Maul's saga! 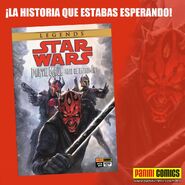 Panini Comics Spanish advertisement
Add a photo to this gallery

In other languages
Retrieved from "https://starwars.fandom.com/wiki/Star_Wars:_Darth_Maul_%E2%80%94_Son_of_Dathomir_(TPB)?oldid=8824777"
Community content is available under CC-BY-SA unless otherwise noted.