For other uses, see Star Wars: Episode I The Phantom Menace (disambiguation).

Deceptions
The Star Wars: Episode I The Phantom Menace novelization was written by Terry Brooks and published on April 21, 1999 by Del Rey. It is based on the script of the movie of the same name. Narration for the abridged audio version was performed by Michael Cumpsty. The unabridged version was performed by Alexander Adams. On January 31, 2012, a new paperback edition was released containing a new short story, End Game, by James Luceno.

A long time ago in a galaxy far, far away, an evil legacy long believed dead is stirring. Even the Jedi are caught by surprise, their attentions focused on the political unrest between the Trade Federation and the Republic. Now the dark side of the Force threatens to overwhelm the light, and only an ancient Jedi prophecy stands between hope and doom for the entire galaxy.

On the desert world of Tatooine, far from the concerns for the Republic, a slave boy works by day and dreams by night—of being a Jedi Knight and one day traveling the stars to worlds he's only heard of in stories… of finding a way to win freedom from enslavement for himself and his beloved mother. His only hope lies in his extraordinary instincts and his strange gift for understanding the "rightness" of things, talents that allow him to be one of the best Podracers on the planet.

In another part of the galaxy, the Jedi Knight Qui-Gon Jinn and his apprentice, young Obi-Wan Kenobi, are charged with the protection of the Amidala, the young Queen of Naboo, as she seeks to end the siege of her planet by Trade Federation warships. It is this quest that brings Qui-Gon, Obi-Wan, and the Queen's beautiful young handmaiden to the sand-swept streets of Tatooine and the shop where the slave boy Anakin Skywalker toils and dreams. And it is this unexpected meeting that marks the beginning of the drama that will become legend…

A long time ago in a galaxy far, far away, an evil legacy long believed dead is stirring. Now the dark side of the Force threatens to overwhelm the light, and only an ancient Jedi prophecy stands between hope and doom for the entire galaxy.

The Jedi Knight Qui-Gon Jinn and his apprentice, young Obi-Wan Kenobi, are charged with the protection of Amidala, the young Queen of Naboo, as she seeks to end the siege of her planet by Trade Federation warships. This quest brings Qui-Gon, Obi-Wan, and one of the Queen's young handmaidens to the sand-swept streets of Tatooine and the shop where the slave boy Anakin Skywalker toils and dreams of finding a way to win freedom from enslavement for himself and his beloved mother. His only hope lies in his extraordinary instincts and his strange gift for understanding the "rightness" of things. It is this unexpected meeting that marks the beginning of the drama that will become legend.

Two Jedi Knights, Qui-Gon Jinn and his apprentice Obi-Wan Kenobi, along with a Gungan outcast named Jar Jar Binks, must help Queen Amidala save her world from the greedy Trade Federation. Along the way, they discover a young boy, named Anakin Skywalker, who has the potential to be a powerful Jedi himself.

The Jedi are dispatched to the planet of Naboo to settle a dispute between the Trade Federation and Queen Amidala. The Federation has blockaded Naboo in order to force them into signing an unfavorable trade agreement. Unbeknownst to the Galactic Senate, the Federation has formed an alliance with Darth Sidious, a Lord of the Sith whose Order the Jedi thought to have been extinct for millennia.

Before negotiations even have a chance to start, the viceroy attempts to assassinate Qui-Gon and Obi-Wan, but the two Jedi thwart this attempt. Onboard the Federation's main ship, they discover a droid invasion army. After escaping to the planet's surface, the two plan to warn Amidala of the approaching army. With the help of Jar Jar Binks, an outcast Gungan, they make their way to Queen Amidala's palace in the capital city of Theed. To avoid signing the treaty, Amidala escapes with Qui-Gon, Obi-Wan, Captain Panaka and Jar Jar Binks and heads to Coruscant, the galactic seat of government. Amidala intends to present her case to the Galactic Senate. En route, they divert to the desert planet Tatooine for repairs to their damaged ship. At a salvage shop, Qui-Gon, Padmé (disguised as a commoner), and Jar Jar meet Anakin Skywalker, a young slave boy. Watto, Anakin's master, refuses to sell Qui-Gon the part he needs for Republic credits, and Qui-Gon must somehow raise a sufficient sum of money. As a sudden desert storm approaches, Anakin offers the group refuge at his home. Qui-Gon discovers Anakin possesses undeveloped Jedi abilities and believes he may be the Chosen One destined to return balance to the Force. He's further convinced when Anakin's mother, Shmi, says Anakin was conceived without a biological father.

To help Qui-Gon get the part for the spaceship, Anakin offers to enter his own racer in a dangerous pod race. Qui-Gon bets Watto the Queen's space ship and the entire winner's purse against the part for the ship and Anakin's freedom. Watto greedily accepts the bet, certain that Anakin will lose. Anakin wins, however, and Watto reluctantly frees him. Wishing a better life for her son, Shmi allows Anakin to leave with Qui-Gon to become a Jedi.

Qui-Gon and Obi-Wan are unaware they have been tracked to Tatooine by Darth Maul, a Sith Lord and Darth Sidious's apprentice. Maul attacks the group as they are about to take off, but they escape. On Coruscant, Qui-Gon reports the reemergence of the Sith to a skeptical Jedi Council. The council denies Qui-Gon's request to train Anakin as a Jedi, claiming he's too old, but Master Yoda has sensed something dangerous in him. Defiant, Qui-Gon says Anakin will be his padawan with or without the Council's approval.

Meanwhile, Queen Amidala presents her case to the Senate. Senator Palpatine convinces her that Supreme Chancellor Valorum is a weak and ineffective leader. In fact, Valorum is attempting to aid Amidala but is stymied by a bureaucratic and increasingly corrupt senate. Urged by Palpatine, Amidala calls for a vote of no confidence against Valorum, and he is removed from office. Palpatine is nominated to replace him. Frustrated by the Senate's inaction, Amidala returns to Naboo accompanied by Qui-Gon, Panaka, Obi-Wan, Anakin, and Jar Jar.

Once there, they meet with the remainder of the Gungans in their sacred place, after Jar Jar has searched Otoh Gunga. There, Padmé reveals herself as the true Amidala (Sabé is her double) and convinces the Gungans to fight with them against the Trade Federation. The Gungans create a diversionary battle in order for the Naboo underground movement to gain entry to the palace. They gain entry and attempt to reach the viceroy, who has taken cover in the throne room. On the way, the party is ambushed by Darth Maul, and the two Jedi engage in a duel — while Anakin and R2-D2 take cover in a starfighter. He attempts to help Padmé's entourage by firing at droids that have also ambushed them. He inadvertently presses the power switch, which activates the autopilot and takes him out to space, towards the droid control ship. There is a heated battle in space which ends with Anakin torpedoing the control ship, deactivating all of the battle droids which ended the battle and saved the overpowered Gungans.

Padmé reaches the viceroy in the throne room, but her party is captured by droidekas. Sabé arrives with a diversion, and the viceroy sends all troops after her, thinking that Padmé is a decoy. Padmé pulls two blasters out of her throne and captures the viceroy.

Meanwhile, the Jedi continue their duel with Maul, and go through many rooms and walkways, until they are separated by laser walls. Qui-Gon and Maul get through and continue their duel, while Kenobi watches helplessly. Qui-Gon is eventually slain by Maul, and Kenobi continues the fight and almost defeats Maul before he is knocked into a plasma input chute. There, Maul attempts to knock him down, but Kenobi performs a Force-aided jump out of the pit, summoning his master's lightsaber with his last remaining strength. He lands and cuts Maul in half. Qui-Gon's last wish is for Kenobi to train Anakin as a Jedi. This wish is granted by Yoda at Qui-Gon's funeral, as well as making Kenobi a Jedi Knight, seeing his killing of a Sith Lord as a sufficient trial.

Terry Brooks devotes the entire fourteenth chapter of his memoir, Sometimes the Magic Works: Lessons from a Writing Life to the writing of the Episode I novelization, which was an extremely happy and fulfilling experience for him.

This novelization, unlike those from the original trilogy, contains much that is not in the movie. It includes three entire chapters of material created by Terry Brooks and unique to the novel. The first two chapters of the book concern Anakin's next-to-last podrace and its aftermath, while a later chapter describes an encounter between Anakin and a wounded Tusken Raider in the desert.

Brooks met with George Lucas before writing the book and received his approval and guidance, including information about developments to come in Episode II and Episode III. This can be seen in such passages as the Tusken Raider scene, which foreshadows the death of Anakin's mother in Episode II, and the passage leading up to Anakin's fight with the Rodian child (Greedo), indicating that Anakin's anger derives from his anguish at Padmé's impending departure (foreshadowing the plot of Episode III). 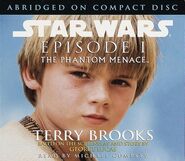