Imperial Assault casts you and your friends into the climactic events following the Death Star's destruction above Yavin 4, and offers two full game experiences within the Star Wars saga. In the campaign game, you and up to four other friends play a series of thrilling missions woven together in a narrative campaign, and in the skirmish game, you and your opponent muster your own strike teams and battle head-to-head over conflicting objectives. Whether you play as a hero of the Rebellion and fight alongside iconic characters like Luke Skywalker and Han Solo, or command the seemingly limitless armies of the Galactic Empire, you'll enter the Star Wars universe in Imperial Assault. 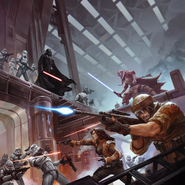 Skirmish Guide
Add a photo to this gallery

Wookieepedia has 52 images related to Star Wars: Imperial Assault Core Set.
In other languages
Retrieved from "https://starwars.fandom.com/wiki/Star_Wars:_Imperial_Assault_Core_Set?oldid=8699866"
Community content is available under CC-BY-SA unless otherwise noted.