Star Wars: Legion is an asymmetrical two player infantry-based wargame published by Fantasy Flight Games. The game re-enacts the Galactic Civil War with one player acting as the Rebel Alliance and the others acting as the Galactic Empire, and includes over 33 assembled miniatures as well as several cards. It was first announced on August 18, 2017 and the Core Set was released on March 22, 2018.

Warfare is an inescapable part of the Star Wars universe, from the Rebel Alliance's defeat in the Battle of Hoth to a few elite Rebel strike teams taking on a legion of stormtroopers on the Forest Moon of Endor. You can seize your chance to get your boots on the ground and lead your troops to victory with Star Wars™: Legion, a miniatures game of thrilling infantry battles in the Star Wars universe!

Star Wars: Legion invites you to enter the ground battles of the Galactic Civil War as the commander of a unique army of miniatures filled with troopers, powerful ground or repulsor vehicles, and iconic characters like Darth Vader or Luke Skywalker. While innovative mechanics for command and control simulate the fog of war and the chaos of battle, the game's unpainted, easily assembled minis give you a canvas to create the Star Wars army you've always wanted to lead into battle—whether you fight for the monolithic, oppressive Galactic Empire or the ragtag Rebel Alliance.

Star Wars: Legion is played between two players, each bringing an army of miniatures assembled and painted before play began. Players have a good amount of flexibility in building their armies, but must build armies consisting of all one faction (Rebel or Empire), with one to two commanders (such as Luke Skywalker or Darth Vader), and three to six corps units (generally troopers). Additionally, a player may bring up to three special forces units, up to three support units, and up to three heavy units. Every unit, as well as the upgrades and abilities they may be granted, is worth a number of points. Traditional tournament play is set at 800 points, though the players may agree on another number outside of tournaments.

Players determine conditions, starting areas, and scenario before beginning play. The scenario determines how players accrue victory points or win, and whoever accrues the most victory points by the end of the game, or meets the specified win condition first, wins.

Play of the game occurs over six rounds. Players first select a Command Card from their hand (which they created when they built their army). The Command Card determines who goes first, as well as allowing their commander to issue commands to nearby units.

On a players turn, they may either activate a unit they commanded with their Command Card, or they may draw a token randomly to determine which un-commanded unit they activate. Activation allows a unit two actions, such as movement and attack.

Each unit has a specified movement value of 1 through 3, which determines which size movement ruler to use to plan their movement. Each unit also rolls a unique combination of the custom dice in the game when they attack. Units have other actions available, such as aim and dodge, which benefit attacking and defending respectively. They may also gain more specific actions from their card or the upgrades they have received.

Players take these activations in turns until neither side has a unit left to activate.

Rounds of gameplay continue until one side has met the scenario's victory condition, one side has no remaining figures (in which case their opponent wins), or 6 rounds have been fully played. 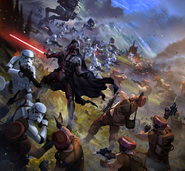 Tournament Regulations
Add a photo to this gallery
In other languages
Retrieved from "https://starwars.fandom.com/wiki/Star_Wars:_Legion?oldid=8851817"
Community content is available under CC-BY-SA unless otherwise noted.