Star Wars: Outer Rim is a canon board game centered on the Outer Rim Territories. One to four players play as bounty hunters, mercenaries, and smugglers. It was released by Fantasy Flight Games on June 13, 2019.

Far from the shadows of Coruscant's skyscrapers lies the dangerous Outer Rim. To many citizens, the galaxy's edge represents a hive of scum and villainy that is better left ignored. But to the scoundrels of the galaxy, the Outer Rim represents the opportunity to become a legend.

Explore the galaxy for yourself with Star Wars: Outer Rim, a game of bounty hunters, mercenaries, and smugglers for one to four players!

In Outer Rim, players take on the roles of outlaws on the fringes of society and set out to make their mark on the galaxy. You'll travel the Outer Rim in your personal ship, hire legendary Star Wars characters to join your crew, and vie to cement your place in the legends of the Star Wars galaxy! Do you have what it takes to survive the dangers of the Outer Rim while building your own legacy? 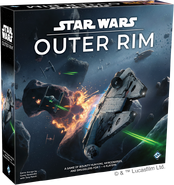 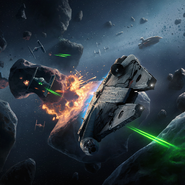