Star Wars: Tales of the Force

Star Wars: Tales of the Force

Star Wars: Tales of the Force is a Star Wars Golden Book title. The 48-page title was published on September 5, 2017 as a part of Journey to Star Wars: The Last Jedi.

Meet the brave Jedi, evil Sith, and all the followers of the Force from the Star Wars saga in this hardcover Big Golden Book!

From Jedi to Sith to those in between—this hardcover Big Golden Book is packed with information and illustrations about the Force and its followers from the Star Wars saga! Children and adult fans will meet all the legends of the Light and Dark Side, including Luke Skywalker, Yoda, Obi-Wan Kenobi, Rey, Darth Vader, the Emperor, Darth Maul, Kylo Ren, Supreme Leader Snoke, and more!

Star Wars has captivated millions worldwide for forty years. The phenomenon began with the 1977 theatrical debut of Star Wars, later retitled A New Hope, and has expanded to include seven additional major motion pictures (The Empire Strikes Back, Return of the Jedi, The Phantom Menace, Attack of the Clones, Revenge of the Sith, The Force Awakens, and Rogue One), television programming, publishing, video games, and much more, with new films coming every year. The Last Jedi releases in theaters on December 15, 2017. 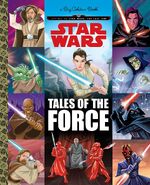