This article is about the home video release. You may be looking for the sixth season itself.

The set includes all thirteen episodes of The Lost Missions, as well as The Clone Wars: Declassified, a sixteen-minute documentary about the series. The Blu-ray version also includes the four-episode Legacy story arc, "Crystal Crisis on Utapau." 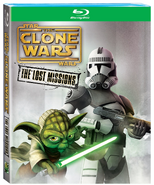