Start a Wiki
watch 04:05
20 Fun Facts From The Last Jedi Visual Dictionary
Do you like this video?

Star Wars: The Last Jedi: The Visual Dictionary is a visual dictionary reference title for the film Star Wars: Episode VIII The Last Jedi by DK Publishing. Written by Pablo Hidalgo, the book was released on December 15, 2017, the same day as the film itself containing information on the film.

Star Wars: The Last Jedi: Visual Dictionary is the definitive guide to Star Wars: The Last Jedi, revealing the characters, creatures, droids, locations, and technology from the new film. Packed with 100+ images and information as penned by Star Wars scribe Pablo Hidalgo, it's a must-have for all fans who want to go beyond the movie experience.' 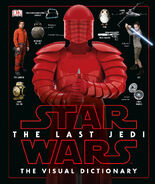 Final cover
Add a photo to this gallery

In other languages
Retrieved from "https://starwars.fandom.com/wiki/Star_Wars:_The_Last_Jedi:_The_Visual_Dictionary?oldid=9311195"
Community content is available under CC-BY-SA unless otherwise noted.