Wookieepedia
Register
Don't have an account?
Sign In
Advertisement
in: Real-world articles, Articles with an excess of redlinks, Incomplete lists,
and 2 more

"With the power of the Force at his command, Anakin must stop Count Dooku from creating a new, more destructive droid army!"
―Game abstract[src]

Star Wars: The New Droid Army is a Legends video game set after the events of the film Star Wars: Episode II Attack of the Clones. It was developed by Helixe and published by THQ on November 14, 2002.

Anakin is called before Mace Windu and Yoda in the Jedi temple and learns that an informant named Raala on Tatooine has sent word of a new type of battle droid on the planet. Contact with her has since been lost. Anakin is tasked to travel to Tatooine to investigate these new droids and discover the fate of their informant.

Shortly after the outbreak of the Clone Wars, the Jedi Council receives a distress call from Tatooine and sends Padawan Anakin Skywalker to investigate. He is assaulted by groups of Womp rats and battle droids and is informed in Mos Espa that something must be disturbing the Womp rats' nests. He travels through Xelric Draw to the Womp rat caves and kills the Anoobas that were apparently responsible for the disturbance. As he leaves the caves, Skywalker encounters Aurra Sing, who attempts to collect a bounty posted on his head by throwing a thermal detonator and sending several of her "associates" after him with vibro-axes before fleeing.

Arriving back in town, a man informs him that Watto could probably help him find Raala Ponchar, the sender of the transmission. However, assassins hired by the Hutts are looking for Anakin. After fighting his way through, Anakin finds Watto, who informs him that Ponchar is at a moisture farm north of town. On his way there, another moisture farmer tells Anakin that Tusken Raiders have kidnapped some other farmers, and Anakin agrees to free them, having "no love for the Tusken Raiders." After this, one of the farmers leads him to Bellek's homestead, where Ponchar is, but they come across a destroyed homestead on the way. The man says that the droids are like none he has ever seen, led by a "witch," had wrecked the place, and now the sand people are looking for salvageable materials. A few homesteads later, Anakin finds Bellek, who says that Ponchar was kidnapped by Jabba the Hutt. Bellek warns Anakin that he will have to travel through the Jundland Wastes, which are "prime Tusken Raider territory." Anakin assures Bellek that he "know[s] how to deal with Tusken Raiders" and asks about the "witch," but Bellek decides he should get back to work on his moisture farm.

Anakin arrives at Jabba's Palace and fights his way through guards and battle droids only to meet Aurra Sing at the front door of the palace, who claims she will enjoy watching Skywalker die. Just then, an unknown figure appears dressed in red and wielding two red lightsabers, telling Sing to save her strength, and Force chokes Anakin. The new arrival then tells Sing to store Anakin in the dungeons, and that she will inform her master "that the Jedi is no longer a threat to our operation." Anakin awakes in the dungeons of Jabba's palace and there finds Raala Ponchar. He easily opens the door to their cell with the Force and the two escape together. Ponchar informs Anakin that Jabba is being paid by Wat Tambor to assist in smuggling construction materials and cortosis to Metalorn. The two free the other prisoners from the dungeon and Anakin escapes on a skiff, which is shot down in the desert by another skiff. The Dark Jedi who captured him previously, named Saato, confronts him near a Sarlacc pit, but she is defeated. Anakin contacts his master, Obi-Wan Kenobi, and tells him what has happened. Obi-Wan, however, tells Anakin to return to Coruscant, as it is under attack.

Anakin arrives at Galactic City and finds Obi-Wan waiting for him there. Obi-Wan explains that Separatist battle droids are attacking the underlevels of Coruscant and instructs Anakin to help fight off the invasion, and then leaves for the Jedi Temple to gather reinforcements. Anakin feels a disturbance in the Force and encounters a lightsaber-wielding man named Trenox, who accuses Anakin of having caused him some trouble, then flees. Anakin pursues him to the underlevels. There, he meets fellow Padawan Barriss Offee, whose troops have been overrun by C-B3 cortosis battle droids. Anakin says he'll take care of it and assists clone troopers in eliminating B1 and C-B3 battle droids as well as Rodian combatants, ASN-121 assassin droids, and droidekas. He runs into Dexter Jettster, who tells him about a Jedi with a red lightsaber who ran into the nightclub. As Anakin pursues, Dexter tells him to remind Obi-Wan to come visit him in CoCo Town more often.

Anakin enters the club, and duels Trenox briefly inside, before Trenox flees yet again and Anakin chases him through a cargo bay. He finds a bald male Chiss and asks him where Trenox is. The Chiss says that Anakin is too late and that Trenox has probably already destroyed most of the Jedi Temple in the two minutes since Anakin last saw him. The Chiss then leaves, claiming to have work to do. Anakin takes an airspeeder to the Jedi Temple, but instead he finds Count Dooku waiting for him. Dooku comments on Anakin's cybernetic arm, saying it suits him, and after an exchange of comebacks Dooku excuses himself, as he has to destroy the Jedi Archives. Anakin protests at the prospect of the loss of a millennia (sic) of knowledge, but Dooku maintains that without the knowledge contained in the Archives, his Separatist allies will be able to win the war. Dooku then leaves Anakin with a C-B3 cortosis battle droid.

After dispatching it, Anakin contacts Obi-Wan with the newfound knowledge of the plot to destroy the Jedi Archives. Obi-Wan's transmission is cut out by a battle of some sort, and Anakin resolves to stop the assault on his own. After fighting through the Jedi Archives, he finds Trenox and they duel in a small room away from the main Archives. Anakin defeats him and receives a hologram transmission from Master Yoda, who says reinforcements have arrived and that Anakin should meet with the Council. There, they inform him that Obi-Wan has been injured in a duel with Dooku and must recover from his wounds. They then tell Anakin to go to Metalorn and find and retrieve Wat Tambor and the plans to the cortosis droids.

After landing on Metalorn in his Jedi Starfighter, Anakin infiltrates a droid factory. Inside, he contacts Master Yoda and tells him that Dooku indeed seems to be creating a new droid army. Yoda replies that Anakin must destroy the factory, as the Jedi Order cannot stand against such a threat. Deeper in the factory complex, Anakin meets the Dark Jedi brothers Vinoc and Karoc and engages them in lightsaber combat. After defeating them, he finds some charges with which to destroy the factory's five reactors. However, Wat Tambor greets him before he can reach the fifth reactor. Tambor brings in the Chiss bounty hunter, Vandalor, to kill Anakin. Anakin defeats him and takes Wat Tambor prisoner before planting the last detonator.

As Anakin and Tambor escape from the destroyed factory, Count Dooku arrives. The two duel, and Dooku says he senses confusion, anger, and pain in Anakin resulting from the death of his mother. Dooku taunts Anakin, trying to make him embrace the dark side of the Force in battle. Anakin attacks Dooku until he falls down, says that his master foresaw his defeat and that Anakin has ensured the fall of the Republic, and fades away.

Back on Coruscant, Anakin informs the council that he has destroyed the factory, defeated Dooku, and apprehended Wat Tambor, whom Supreme Chancellor Palpatine has requested is to be kept under the watch of his personal guard. Mace Windu and Yoda note that Anakin's skills are advancing rapidly, although Yoda notes that he senses a shadow approaching, and that the Republic is growing weary of war. Anakin gives his word that he will always be there for the Republic.

Star Wars: The New Droid Army was developed by Helixe and published by THQ on November 14, 2002, exclusively for the Game Boy Advance. The game's story was written by Helixe's Daniel Thron and Lead Designer Dave Konieczny, while the game design was led by artist Christopher Bruser. It was given an "E" rating by the ESRB, with a content descriptor stating "violence."

"For years I've wanted to see some author use that neat dark side doppleganger trick Luke used in the Dark Empire graphic novel, where Leia and Han think they've rescued him from the dark side world Byss, and then once aboard the Millennium Falcon, the doppleganger-Luke sort of mocks his rescuers, saying he's actually still on the planet."
―Abel G. Peña's basis for the "Dooku" retcon[src]

At the end of the game, Anakin defeats and apparently kills Count Dooku. However, this ending led to a continuity issue when Dooku appeared in later content. In response, Star Wars writer Abel G. Peña created a retcon in The Official Star Wars Fact File 116, saying that "Count Dooku" in Star Wars: The New Droid Army was not the real Dooku, but a dopplegänger projection created through the Force. The concept had previously appeared in the comic book series Star Wars: Dark Empire, which served as the basis for Peña's retcon. This retcon was later mentioned in the 2004 novel Yoda: Dark Rendezvous.[3]

"When you're playing an action game, the last thing you want to do is to stand around regaining stamina while there are still aliens left to fight."
―Metacritic consensus[src] 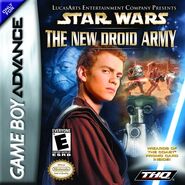 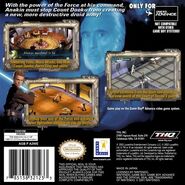