This article is about the box set and reference book. You may be looking for the in-universe artifact.

Star Wars: The Rebel Files is a reference book written by Daniel Wallace. The book, similar to Star Wars Legends titles such as The Jedi Path, is an in-universe documents about the procedures, equipment and personnel of the Rebel Alliance. The boxed set was released on November 21, 2017. A book-only edition was later released on July 3, 2018.

This top-secret cache reproduces highly sensitive intelligence that traces the Rebel Alliance from its formation through its tireless fight against the Empire. From its earliest beginnings in covert opposition to Imperial operations, the Alliance could not trust its most sensitive information to risk of digital interception. Instead, it was kept in a secure case, traveling with key senior Rebel personnel. Lost in the chaos surrounding the Battle of Endor, it was rediscovered many years later by the newly formed Resistance.

Richly illustrated and full of strategic detail and history, the files also feature additional annotation by Resistance members such as General Leia Organa, Mon Mothma, Poe Dameron, and Admiral Ackbar, making this a crucial read for fans seeking a deeper understanding of the saga. 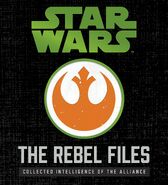 Contents of the box

Book-only edition
Add a photo to this gallery

Wookieepedia has 40 images related to Star Wars: The Rebel Files.

In other languages
Retrieved from "https://starwars.fandom.com/wiki/Star_Wars:_The_Rebel_Files?oldid=8783508"
Community content is available under CC-BY-SA unless otherwise noted.