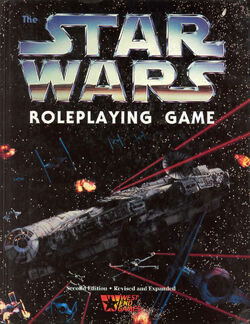 One player is the gamemaster who runs the gameworld, being something like the director and referee, while the other players have a single character or role to play. The player characters have various skills and equipment and some can even use the Force.

Three versions of the main rulebook were published: first edition, second edition, and "Revised and Expanded" second edition. All three were based on West End Games' D6 System.

The West End Games sourcebook collection is made of almost 100 books—not including second editions and compilations—plus 15 quarterly magazine issues under the title Star Wars Adventure Journal. They also edited several books related to, but not belonging to, the Roleplaying Game line, including Star Warriors, the board games Escape from the Death Star and Assault on Hoth; the two-player game Lightsaber Dueling, the Introductory Adventure Game, Star Wars Miniatures Battles, the Live-Action Adventures and single-player adventure books.

The material produced by West End Games was one of the major sources of Expanded Universe material before the publication of Heir to the Empire in 1991 sparked new interest in Star Wars publications, and remained an important source of EU material afterward as well. Being one of the first sources giving numbers and data to the universe shown in the films, several of the statements given by the sourcebooks have been retconned or corrected to better reflect the films and Expanded Universe fiction. Among the best known corrections are the continuity issues involving the Super Star Destroyers and the "discovery" of the Mon Calamari by the Galactic Empire.

When Timothy Zahn was hired to write what became The Thrawn Trilogy, he was sent a box of West End Games Star Wars books and directed to co-ordinate his writing with the background material already developed in the roleplaying game.[1] After the novel trilogy's success, West End Games created a series of sourcebooks inspired by Zahn's work.

In 1999, West End Games lost the Star Wars RPG license. The new licensee, Wizards of the Coast, began production of a new roleplaying game using their d20 System. As for West End Games, in 2004 they started publishing D6 Space, a generic space opera game system based on the former Star Wars: The Roleplaying Game, but not including specific Star Wars content. In 2012 Fantasy Flight Games released their own Star Wars RPG called Edge of the Empire.

In the early 1990s, before the promulgation of the modern Internet, the FidoNet Star Wars Echo ran a message forum for playing the West End Games Star Wars Roleplaying Game on-line on BBS.

In 2017, Fantasy Flight Games announced a 30th Anniversary Edition's reprint of the first edition's rule- and sourcebook, scheduled originally for Q4 2017,[2] but was pushed back several times until its July 5, 2018 release.