"A long time ago, in a galaxy far, far away... There came a time of revolution, when rebels united to challenge a tyrannical empire."
―Introduction to each installment of the radio drama —

Star Wars was a thirteen-part (6½ hour) expanded radio adaptation of the original Star Wars film, produced in 1981 and broadcast by National Public Radio as part of NPR Playhouse. It was adapted by Brian Daley, directed by John Madden and published by HighBridge Audio. It is the first in a series of radio dramatizations of the original Star Wars trilogy. Following its success, two more radio dramatizations were produced, of The Empire Strikes Back (1983) and Return of the Jedi (1996).

The series was made with the full cooperation of George Lucas, who donated the rights and allowed the use of sound effects and music from the films. As with other Legends material, only material matching what was featured in the original film is considered canon, but many elements of the story first featured in the radio broadcasts were later referenced in other Legends stories. Many of the actors involved in the movie were unavailable to reprise their roles (Harrison Ford, for instance, was committed to Raiders of the Lost Ark), but Mark Hamill and Anthony Daniels returned to reprise Luke Skywalker and C-3PO, respectively.

The medium of radio has a less demanding narrative pace than cinema, allowing script writer Brian Daley more freedom to expand the characters and explore the situations leading up to the first film. The first thirteen-episode drama thus includes lengthy scenes set in Anchorhead, on Alderaan, on Ralltiir, and on board the Tantive IV.

The series fleshes out the storyline by adding a great deal of backstory that had probably been created but not used by Lucas. For instance, there is a skyhopper race between Luke Skywalker and his friends that takes place days or weeks before the events of the movie.

The advertising slogan of the radio series was, "You may think you've seen the movie; wait 'til you hear it!" One of the strengths of radio is that listeners are called upon to use their imaginations and create their own visuals mentally. The drama succeeds by the auditory associations with the movies, drawing on the subliminal power of John Williams's incidental music, Ben Burtt's sound design, and of course the voices of the leading actors from the cinema screen, Mark Hamill and Anthony Daniels.

The whole of episode 1 is set on Tatooine, and fills in much of the backstory of Luke's difficult relationships with his Anchorhead friends. Rising to the challenge of a skyhopper race against the cocky Fixer, Luke wins the race and the respect of his peers. When Luke spots the capture of the Tantive IV by the Devastator in the Tatooine sky, his friends ridicule him. These scenes tie in closely with the cut Anchorhead scenes from the first Star Wars film, portraying a convincing picture of teenage life on a desert planet. Luke's relationship with Biggs is explored with emotion as they face the pain of parting.

In episode 2 Princess Leia Organa and Captain Antilles are detained by the scheming Lord Tion on Ralltiir. While on the planet, evidence of Imperial atrocities influences Leia to take a stand against the Empire. She also makes contact with a Rebel spy who reveals intelligence about a secret Imperial project, code-named "Death Star."

Tion visits Leia and her father, Bail Organa, on the pacifist world of Alderaan, but tensions rise between Leia and Tion, and in her anger, Leia lets slip the code name, thus revealing her Rebel associations. Tion attempts to arrest Leia, but during a struggle he is accidentally shot.

Realizing the seriousness of the situation, Bail Organa resolves to help the Rebellion, and plans to take the Tantive IV on an undercover mission to Toprawa to intercept the Death Star plans from the Rebels (see Havet Storm). Leia persuades her father to allow her to run this mission with Captain Antilles. Realizing that the galaxy is facing a terrible threat, he commissions her also to locate the exiled Jedi Knight General Obi-Wan Kenobi, and ask him to resume the fight against the Empire.

Episode 3 begins on board the Tantive IV. Droids C-3PO and R2-D2 meet in the droid pool.

The Tantive IV emerges from hyperspace over the planet Toprawa and receives the transmission of the secret Death Star plans. The ship is pursued by the Imperial Cruiser Devastator through hyperspace to Tatooine. Before Leia can locate General Kenobi, the Tantive IV is attacked and boarded. Desperate to get the data tapes [sic] off the ship, Leia resorts to loading the data into a droid—Artoo Detoo—instructing him to take an escape pod down to Tatooine and bring the Death Star plans to General Kenobi.

At this point, the drama reaches the point where the first Star Wars film, A New Hope, begins. While the dialogue is more verbally detailed for the radio medium, the story now more or less adheres to the original film narrative. Some notable additional scenes or interpretations that expand the story are:

After being picked up by Jawas, C-3PO tells them where to find R2-D2. Once captured, Artoo then sabotages another astro-droid, so that it malfunctions, which prompts Uncle Owen to buy Artoo instead.

In episode 6, C-3PO and R2-D2 hide in a Mos Eisley used-droid lot to avoid Imperial stormtroopers. They evade capture, but the owner kicks them off his property shortly after. In episode 7, again trying to evade stormtroopers, Artoo knocks on a Mos Eisley resident's door. Threepio tells the owner that he and Artoo are members of the Skywalker Technical Maintenance Service, and that the droids are canvassing the area as a part of a publicity campaign. When the owner steps out, Threepio and Artoo hide inside the shop and lock the door (the portion of this scene depicted in the film).

In episode 8 Princess Leia is held aboard the Star Destroyer Devastator on approach to the Death Star. In a chilling exchange, Darth Vader invites Leia to gaze on the Death Star through the viewing portal of the ship, offering her one last chance to reveal her Rebel connections before she is tortured by several different devices, including the injection arm, aboard the Death Star. Nevertheless, Vader displays a certain respect for his royal prisoner, ordering his captain to treat her courteously.

Later, aboard the Death Star, Vader is heard torturing the princess, using hypnotic drugs to make her talk (this is, essentially, an extension of the "torture droid" scene from the movie, detailing what happens after the door closes). His interrogation fails, and he summons a medic to tend to Leia prior to further questioning.

In a private conversation, Admiral Motti suggests to Grand Moff Tarkin that he should consider using his command of the ultimate weapon to overthrow the Emperor. Outwardly, Tarkin rebuffs Motti, but it is also clear that the idea had previously crossed his mind as well.

In episode 11, while separated from Han Solo and Chewbacca on the Death Star, Luke and Leia hide from stormtroopers in a utility compartment. Leia asks Luke about how he got involved in the story, and Luke expresses his condolences to Leia for the destruction of Alderaan. They are soon discovered, and the action leads to the chasm-swing scene from the film.

Episode 12 contains extended exchanges between the principal characters concerning Han Solo's decision to depart immediately. Solo threatens and harries Commander Willard for his promised payment, demanding the precious metals that he knows would be needed for the Rebel combat operation. Luke later visits Solo and attempts at length to change his mind, confiding in Solo his decision to volunteer as a pilot for the Rebel assault on the Death Star.

Leaving Leia to pacify an enraged Han, Luke joins Biggs Darklighter, who tests his flying abilities using a flight simulator. It is revealed by Commander Willard that Luke was only "killed" twice, despite Biggs pitting him against the virtual equivalent of the entire Imperial Starfleet. (Whether Willard was exaggerating is left for the listener to determine, though regardless Luke does well enough that the Rebels are willing to put him into a starfighter for the assault.)

Other broadcasts and releases[]

NPR's reruns of the first series had some small timing cuts. One of these involves some dialogue in which Leia tells her father about a walk she took in the countryside on Alderaan, which makes the planet's eventual fate seem more of a personal tragedy to her.

BBC Radio 1 broadcasted the series in the UK, with a key scene in the final episode clumsily cut for timing.

All three series were released on cassette and CD in the US, in a version retaining NPR's cuts.

The Collector's Limited Edition release restored dialogue removed in the cuts made by NPR.

The script of the first episode, "A Wind to Shake the Stars," including an interview with scriptwriter Brian Daley, was later published in Star Wars Galaxy Magazine 2.

In 1981, in conjunction with the original release of the series, NPR ran a 30-minute special, produced by Minnesota Public Radio, titled "The Making of Star Wars for Radio: A Fable for the Mind's Eye," featuring interviews with members of the cast and production team. 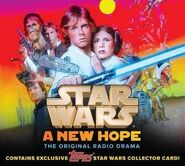 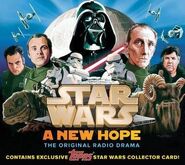 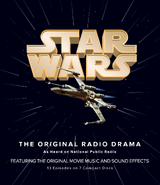