Star Wars Adventures is an anthology comic book series set in the Star Wars canon. The IDW Publishing series features stories from the entirety of Star Wars and is intended for all ages. The first issue was released digitally on July 12, 2017 on StarWars.com and was later released physically as a part of a San Diego Comic-Con (SDCC) promotion, while the regular series officially launched on September 6. On January 3, 2018, IDW also published a spinoff weekly miniseries based on the Forces of Destiny animated micro-series.[22] The trade paperback of the Weapon of a Jedi German comics published by Panini Verlag is titled Star Wars Adventures: The Weapon of a Jedi.[23]

In early 2016, IDW Publishing presented the idea for a comic book series aimed at younger audiences to Lucasfilm. Artists like Derek Charm[24] and George Caltsoudas were commissioned by IDW to create art for their pitch.[25] 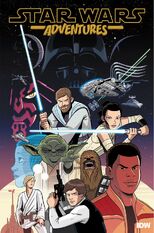 The series was announced on April 14, 2017 at Celebration Orlando during the publishing panel as a new IDW ongoing comic book series that would tell stories from across the saga.[26]

A day later, in an interview with The Star Wars Show, IDW Publishing chief creative officer Chris Ryall talked more about the series. He revealed the fact that the book will have rotating creative teams and that each issue will feature a lead story about popular characters from the films and back-up stories with lesser known or fan-favorite characters, including the ones from the TV series, hosted by Maz Kanata as the narrator,[27] though other characters, such as C-3PO, were considered too.[28] Ryall also said that some of the back-up stories will not be entirely canon.[27]

On June 6, 2017, Ryall conducted an interview with the podcast Comics with Kenobi, where he spoke about the series. He said that a lot of people messaged him soon after the announcement about them wanting to do this their entire life. This allowed Ryall to make a large creative pool, from which he could pull from in the future. It was explained that while Marvel Comics still has the Star Wars comics license, they don't have any books aimed at beginner readers, which is where Star Wars Adventures would come in. Ryall also suggested that the usage of Maz Kanata as the back-up-story storyteller might have been dropped by this point.[29]

On June 14, 2017, IDW released their upcoming comics catalogue, which included the release information on the first and second issue of the series, excluding the SDCC Ashcan. Lead stories in both issues would be about Rey's adventures on Jakku prior to Star Wars: The Force Awakens, while issue 2 particularly would star Unkar Plutt. Issue 1's back-up story would be a "comical tale of clone catastrophe,"[2] though the story would ultimately be about Obi-Wan Kenobi.[30]

Chad Thomas did a few try-out character designs, including Han Solo, Chewbacca,[31] Yoda,[32] and Kylo Ren,[33] around this time to get to work on the series.[34] It was eventually announced that he would be doing the art for the back-up story of Star Wars Adventures (2017) 6.[7]

The character of Maz Kanata as the storyteller of the stories featured in the back-ups of each comic was eventually replaced by the adventurer Emil Graf, a new character created for the series.[14] These stories are titled Tales from Wild Space, after Star Wars: Adventures in Wild Space, a series of novels by Cavan Scott, which feature characters Milo Graf and Lina Graf.[30]

The first volume was originally solicited to be released as a part of the Journey to Star Wars: The Last Jedi.[35] However, that idea was later dropped.[36]