Discovery Series
Star Wars Adventures in ABC was a book-and-record and book-and-cassette tape set aimed at younger readers. Each page showed a letter of the alphabet and a character, animal or vehicle whose name starts with that letter, along with a short poem about the subject. The recording was co-narrated by veteran voice actor William Woodson and Anthony Daniels as C-3PO. It was produced by Ted Kryczko.

The following were the subjects of the poems:

The book's illustration of Greedo is based on the original Kenner action figure, with its alternative outfit. As with many early sources, the Zuckuss entry is illustrated with an image of 4-LOM.

The book has many references to Earth. For example, Ewoks are compared to Winnie-the-Pooh and tauntauns to kangaroos. Mexico, Texas, Hans Christian Andersen and the Brothers Grimm are also mentioned. 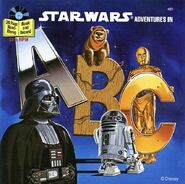 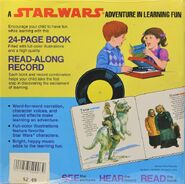 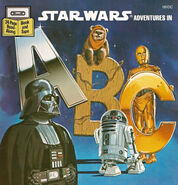 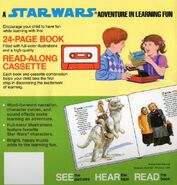 Book and tape back cover