Star Wars: Episode I - The Phantom Menace is an action-adventure game released by LucasArts in 1999, coinciding with the release of the movie.

Visually, the gameplay is similar to third-person "over the head" view games, but actions such as jumping, climbing, or pushing objects are very limited, relying mostly on interaction and dialogue options. The player controls Qui-Gon Jinn, Obi-Wan Kenobi, Queen Amidala, or Captain Panaka in different levels. The game also offers a variety of weapons and slightly different expansion of the same movie storyline and is rather similar to the 2005 Star Wars Episode III: Revenge of the Sith video game.

The game has two opening crawls. The first is identical to that of the movie:

The second crawl appears after the Coruscant level, following Senator Palpatine's proposal to call for a vote of no confidence in Supreme Chancellor Valorum:

Although the plot closely follows the movie, it either expands on some minor events that could have been cut from the movie, or shows them from a different character's point of view. For example, it follows Amidala's "adventures" on Coruscant during Anakin Skywalker's interview in the Jedi Temple—something that is not shown in the movie.

There are also some apparent inconsistencies or contradictions to the storyline in order to generate a new narrative. These include Jar Jar Binks being imprisoned on his return to Otoh Gunga and the player having to rescue him to continue the story.

Qui-Gon Jinn and Obi-Wan Kenobi boarded the Trade Federation's flagship. While they were waiting to meet Viceroy Nute Gunray, the room started filling with poison gas. The two Jedi fought their way out, destroying battle droids along the way. At one point, Obi-Wan was separated from Qui-Gon on the way to the hangar. As the Trade Federation had destroyed the Jedi's ambassadorial ship, Obi-Wan sneaked on board one of the landing craft bound for Naboo.

After landing on Naboo, Obi-Wan navigated his way through the swamps and encountered Jar Jar Binks, who led him to Qui-Gon. He fought some battle droids and hostile creatures along the way. After reuniting with Qui-Gon, Jar Jar told them about Otoh Gunga and reluctantly brought them there to take shelter from the Trade Federation.

In Otoh Gunga, Qui-Gon and Obi-Wan realized that Jar Jar had been banished for his clumsiness, and had been forbidden from returning—on pain of death. Jar Jar got arrested and thrown into prison to await execution. Boss Nass and the Gungan High Council agreed to provide the Jedi a bongo for their journey to Theed through the planet's underwater core. While Qui-Gon tried to convince the Council to spare Jar Jar, Obi-Wan went to rescue Jar Jar. He used a Force mind trick to make the prison guards release Jar Jar, and then they made their way to the bongo bay to meet Qui-Gon and leave together. They navigated the bongo through the core and narrowly escaped from attacks by an opee sea killer and a sando aqua monster.

Upon arriving outside Theed, the three of them were about to cross a bridge leading directly to the city gates when a Trade Federation AAT blocked their way and destroyed the bridge. Obi-Wan was separated from Qui-Gon and Jar Jar, and had to take a longer route through the Theed Royal Gardens to enter the city. Along the way, he encountered Royal Naboo Security Forces and joined them in fighting the battle droids. Upon reaching his destination, he destroyed the AAT and used Force push to activate the lever that unlocks the gates.

Qui-Gon, Obi-Wan, and Jar Jar managed to meet up with Queen Amidala, who told them her plan to escape from Naboo and go to Coruscant to persuade the Galactic Senate to help them. On the way to the hangar, an explosion caused Obi-Wan and the Queen to be separated from Qui-Gon and the rest. Obi-Wan had to escort the Queen safely to the hangar on his own. Along the way, he destroyed several battle droids and helped some Naboo soldiers and civilians. They reunited with everyone in the hangar, where they boarded a Royal Naboo Starship.

While breaking through the Trade Federation's blockade, the starship came under heavy fire, and its T-14 hyperdrive generator sustained severe damage. They decided to land on Tatooine to make repairs. Qui-Gon, Amidala, and Jar Jar headed to Mos Espa to find replacement parts. Qui-Gon defeated some Tusken Raiders who ambushed them along the way.

In Mos Espa, they learned from the locals that Watto, a junk dealer, had the parts they needed. With help from Anakin Skywalker, Watto's boy slave, Qui-Gon met Watto and made a bet with him for the hyperdrive generator in the Boonta Eve Podrace, which was held on the following day.

Qui-Gon helped Anakin find a mass coupler and a servo control system to fix his podracer. Concurrently, he completed some side quests: finding Jar Jar (who had gone missing) in a bathhouse, fighting some street thugs, saving Vek Drow from robbers, and rescuing Tomo from Captain Neg's hideout.

In the Mos Espa Grand Arena, before the podrace started, Ann Gella lured Qui-Gon into a trap set by Jabba the Hutt, who forced the Jedi Master to fight his champion. Qui-Gon slew the creature and received 50 peggats to use in his bet with Watto. Qui-Gon and Watto struck a deal: If Anakin won the podrace, Watto would free Anakin and give Qui-Gon the T-14 hyperdrive generator; if Anakin lost, Watto would get the Royal Naboo Starship; either way, Watto would keep the 50 peggats.

Qui-Gon encountered Jym Lang, a bounty hunter hired by Jabba to assassinate the podracer Teemto, and used a Force mind trick to stop him from killing Teemto. Just before the race started, a thief stole an ignition capacitor from Anakin's podracer and fled. Qui-Gon tracked down the thief, defeated a scavenger, and helped Anakin retrieve the ignition capacitor. Anakin won the podrace and earned his freedom.

The locals, including Anakin's mother Shmi Skywalker, came to see Qui-Gon, Anakin, and their companions off. While heading back to the Naboo Royal Starship, Qui-Gon destroyed three probe droids that attacked them. Shortly after, he was attacked by Darth Maul, who used the Force to trigger a rockslide to block his way. After fending off Maul's attacks, Qui-Gon found a path through the rocks and moved on. As Qui-Gon was approaching the starship, Maul showed up again and tried to destroy the hyperdrive generator. Qui-Gon managed to hold off Maul long enough before boarding the starship just as it took off, leaving Maul behind.

On Coruscant, after Qui-Gon, Obi-Wan, and Anakin left for the Jedi Temple, Queen Amidala and Captain Panaka followed their armed escorts to the Senate Chambers to meet Senator Palpatine. However, mercenaries and a hover cannon killed their escorts and destroyed their air taxi, forcing them to find their own way to the Senate Chambers. After Panaka traded his electrobinoculars for a pair of Coruscant City Tours tickets, Panaka and Amidala tried to take the tour transport to the Senate Chambers but the transport left without them when a hover cannon fired at it. After destroying the hover cannon, Panaka left the Queen alone for a while and went to activate some controls. The mercenaries used the opportunity to kidnap the Queen and brought her into the Restricted Area. Panaka fought the mercenaries and found his way into the Restricted Area, where he rescued the Queen and defeated a Sun Guard who tried to stop them. They successfully reached the Senate Chambers and spoke to Senator Palpatine.

Disappointed by the politicking and corruption in the Galactic Senate, Queen Amidala decided to take matters into her own hands by returning to Naboo to fight the Trade Federation and free her people. She was accompanied by her followers, the two Jedi, Anakin, and Jar Jar. While Jar Jar joined his fellow Gungans in creating a diversion to distract the Trade Federation Droid Army, the Queen and everyone else infiltrated Theed to capture Trade Federation Viceroy Nute Gunray and force him to end the occupation of Naboo.

In the hangar, Qui-Gon and Obi-Wan encountered Darth Maul and dueled him while the others moved on. As the duel took them deep into the Theed Generator Complex, Obi-Wan got separated from Qui-Gon and Maul after falling off a ramp.

In the meantime, Amidala and Panaka fought their way through the streets of Theed, destroying Trade Federation battle droids and getting all the help they could from Naboo soldiers and civilians alike. After destroying a large force-field generator blocking their way, they arrived outside the Theed Royal Palace and broke in through a side window.

Inside the Royal Palace, Amidala and Panaka had to find three security pass keys that would grant them access to the Throne Room, where Nute Gunray was. Along the way, they cleared out Trade Federation battle droids and freed captured Naboo soldiers. They managed to corner Gunray inside the Throne Room and took him prisoner, ending the Trade Federation's occupation of Naboo.

Meanwhile, Obi-Wan navigated his way through the Theed Generator Complex while observing Qui-Gon and Maul from a distance. He destroyed battle droids along the way and used the Force to jump from platform to platform in an attempt to catch up with his master. By the time he reached the generator core, he saw Qui-Gon being struck down by Maul. After passing through the laser gates, Obi-Wan dueled Maul and eventually defeated him.

With his dying breath, Qui-Gon made Obi-Wan promise to train Anakin, whom he believed was the Chosen One. Before the credits started rolling, the people of Naboo celebrated their liberation with a victory parade in the streets.

This is a gallery of the cover variations of Star Wars Episode I: The Phantom Menace. 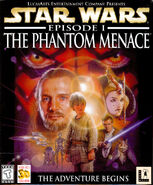 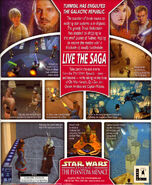 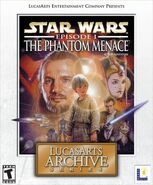 Japanese cover
Add a photo to this gallery 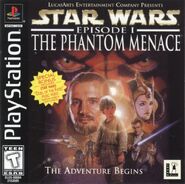 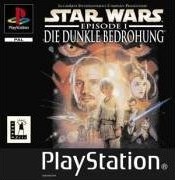 Japanese back cover
Add a photo to this gallery

"Try me!"
―Obi-Wan Kenobi, before killing a room of Gungan guards[src]

In almost every level, the player can commit "dark side" or "evil" actions without any negative consequences or repercussions such as having to restart the level or gaining dark side points. The options are:

Star Wars: Episode I: The Phantom Menace received generally mixed to positive reviews, and was praised for its graphics, exploration, action and sound. However, the game was criticized for its simple gameplay controls and camera angle which provided a short field of view. The PC version holds an aggregate score of 63.35% and 56.42% for the PlayStation version at Game Rankings. The PC version has slightly better and more detailed graphics than the PlayStation version.

In other languages
Retrieved from "https://starwars.fandom.com/wiki/Star_Wars_Episode_I:_The_Phantom_Menace_(video_game)?oldid=8986519"
Community content is available under CC-BY-SA unless otherwise noted.