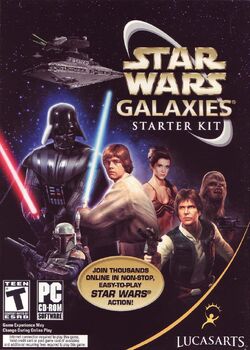 It includes the base game, An Empire Divided and the first expansion, Jump to Lightspeed. It also includes an in-game reward known as an Instant Travel Vehicle. Players can choose either a TIE fighter or X-wing. The vehicle can then be called down on most any planet in the game, which the player can use to travel to any shuttle or space port on the planet.

As part of the "New Game Enhancements", the Starter Kit includes a large amount of new content, including the "Legacy" quest and the Tansarii Point Station prologue.

Retrieved from "https://starwars.fandom.com/wiki/Star_Wars_Galaxies:_Starter_Kit?oldid=8980658"
Community content is available under CC-BY-SA unless otherwise noted.