Star Wars Miniatures: Legacy of the Force ad is an ad produced by Wizards of the Coast to advertise the Star Wars Miniatures set, Legacy of the Force. The first in the series of ads, it is drawn by Jan Duursema, the artist for the Star Wars: Legacy comic series, and is based on the style of the old super-hero fruit pie adverts. The storyline features characters from both the Rebellion era and the Legacy era, to highlight the diverse nature of Star Wars: Miniatures, where chracters from any era can be used together. It was printed on the back covers of Star Wars Insider issues 100[1], 102[2] and 103[3], and also in a number of Dark Horse comics.[2] Parts of the ad were also used to feature in ad banners on StarWars.com. Duursema also penned a similar ad for Star Wars Miniatures: Knights of the Old Republic. 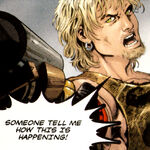 Cade Skywalker and Deliah Blue are confronted by the Sith Lords Darth Krayt, Darth Talon and Darth Nihl, who are trying to capture Skywalker. Cade said that they should be afraid of him, because he was a tough bounty hunter, when he was suddenly confronted by Boba Fett, who planned to capture Skywalker and Blue to claim their bounty. Luke Skywalker was somehow also present and warned Fett to leave Cade alone, causing Fett and Cade to both become very confused about his presence there. Darth Krayt interrupted then and attempted to bring the focus of the encounter back to him, but Han Solo was also somehow there and with Blue's help, he was able to kick Krayt in the head. Cade then drew his blaster and held it aimed at everyone present, demanding to know how everything that had just happened was possible.

Retrieved from "https://starwars.fandom.com/wiki/Star_Wars_Miniatures:_Legacy_of_the_Force_advertisement?oldid=2480756"
Community content is available under CC-BY-SA unless otherwise noted.