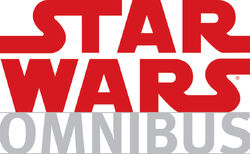 Dark Horse Comics' Star Wars Omnibus Collections were created as a way to showcase actual novel-length stories or series, and to provide homes for "orphaned" series, single-issue stories, and short stories which would otherwise never be collected, or which might fall out of print.

Eventually, there would probably be an Omnibus for every series (or for groups of stories taking place in the same time period). Each Omnibus volume would contain the equivalent of three to five 4-issue trade paperbacks. Dark Horse planned to release two or three per year, resulting in all of the existing trade paperbacks being "omnibussed". Having "omnibussed" all of the existing comic material, the project would become an ongoing program.

Differences between Omnibus and TPBEdit

The Omnibus series is not exclusive to Star Wars titles. Dark Horse has also released Omnibi for other series such as Aliens, Alien Vs. Predator, Predator, Terminator, Buffy the Vampire Slayer, and Indiana Jones. Publishing BB art is known to publish tables and wall calendars for the Czech version of Omnibus.

In other languages
Retrieved from "https://starwars.fandom.com/wiki/Star_Wars_Omnibus?oldid=8899602"
Community content is available under CC-BY-SA unless otherwise noted.