"It was a simple story about a boy who was lost and a girl who was broken. They fought alongside a survivor, a war veteran, and a fallen knight. I led them into battle against an evil so terrible it tried to black out the stars. We fought for each other. We fought for those who could not. But we never imagined it would end like this."
―Hera Syndulla[src]

Star Wars Rebels Season Four is the fourth and final season of the animated television series Star Wars Rebels. It was announced on March 3, 2017, and debuted on Disney XD on October 16.

At Celebration Orlando, Dave Filoni, series creator and executive producer, confirmed that it was the final season of the series. He said that it was his decision to end here and very glad to give a proper ending to the series, unlike in The Clone Wars. According to Filoni, it is darker and a bit funnier than the previous one.[6] Voice recording began by August of 2016.[7] Filoni later added that, with it being the final season, everything was magnified and nothing could be wasted. He described himself as being pleased with the season as a whole and extremely happy with the finale.[8] The season was released on Blu Ray and DVD on July 31, 2018.[9] 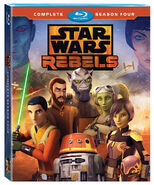 Blu-ray cover
Add a photo to this gallery

In other languages
Retrieved from "https://starwars.fandom.com/wiki/Star_Wars_Rebels_Season_Four?oldid=8923250"
Community content is available under CC-BY-SA unless otherwise noted.