View source
watch 02:21
Star Wars Rebels Season One: A Look Ahead
Do you like this video?
Play Sound

Star Wars Rebels Season One is the first season of the animated television series Star Wars Rebels. The season premiered on October 3, 2014 on the Disney Channel, beginning with the one-hour television movie Star Wars Rebels: Spark of Rebellion. The full series began on Disney XD with the premiere of the episode "Droids in Distress" on October 13, and it ended with "Fire Across the Galaxy" on March 2, 2015. The season is executive produced by Dave Filoni, Simon Kinberg, and Greg Weisman.

The first season, set five years before Star Wars: Episode IV A New Hope, follows the crew of the starship Ghost in the early days of the fight against the Galactic Empire. The crew attracts the attention of Agent Kallus of the Imperial Security Bureau, who wants to eliminate them as a threat before they can spark a wider rebellion, and the Grand Inquisitor, a dark sider who is tasked with killing any Jedi who survived Order 66—including Kanan Jarrus and his new apprentice, Ezra Bridger. The crew of the Ghost will eventually help form the Rebel Alliance.

The first episode of the series was scripted and had begun the animation process by December 2013.[10] By January 2014, Season One's scripts had been halfway completed, with voice recording finished for five episodes and other episodes in various stages of production.[11] On January 17, animation supervisor Keith Kellogg announced that the first episode had been fully animated.[12]

On May 9, 2014, Simon Kinberg confirmed that season one would contain 16 episodes (released as four shorts, a movie, and 13 episodes), and that he had personally written the first two episodes (which were later rebranded as a movie) as well as the season finale.[13] 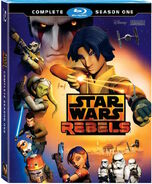