"We are proud to bring our audience a third season of Star Wars Rebels, a series that has resonated across generations. The creative team behind the series continues to do a brilliant job in delivering on the key tenets that fans have come to expect from a Star Wars property including adventure, hope and the battle between good vs. evil."
―Marc Buhaj, senior vice president, Programming and General Manager, Disney XD[src]

Star Wars Rebels Season Three is the third season of the animated television series Star Wars Rebels. The season premiered with a one-hour television movie, Steps Into Shadow, on September 24, 2016.[2] Regular episodes premiered on October 1, 2016 with the airing of "The Holocrons of Fate." For this season, Dave Filoni stepped down as supervising director, replaced by Justin Ridge.[6]

Having established a secret base on Atollon, the Ghost crew, now led by a more powerful Ezra, strengthens the rebel fleet by acquiring new resources and recruits eager to stand against the Empire. However, the Imperial efforts to eliminate the rebellion are now being led by the coldly analytical Grand Admiral Thrawn, whose strategic, tactical and cultural insights make him a threat unlike any they have faced before. In season three, Ezra and Sabine take on new roles and challenges as the rebels prepare for their biggest mission yet—a direct assault on the Empire.[7] 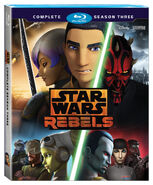