"If Season One represents A New Hope, Season Two is very much inspired by Empire Strikes Back."
―Dave Filoni[src]

Star Wars Rebels Season Two is the second season of the animated television series Star Wars Rebels. The season premiered with a one-hour television movie, The Siege of Lothal, on June 20, 2015. Regular episodes premiered on October 14, 2015 with the airing of "The Lost Commanders."

The production on the second season of the animated television series Star Wars Rebels was officially confirmed on October 2, 2014, one day before the release of the series premiere movie, Star Wars Rebels: Spark of Rebellion.[1] Season One executive producers and series creators Dave Filoni and Simon Kinberg continued their creative roles during the second season,[1] while executive producer Greg Weisman left the series after the completion of the first.[12] Series supervising writer Henry Gilroy took his place as co-executive producer.[1] Freddie Prinze Jr., who voices Kanan Jarrus on the show, revealed that the cast had recorded "nearly twice as many episodes" as the first season,[13] with the official season having 20 episodes, and one television movie.[14]

On December 11, 2014, it was announced that the premiere episode of season two would debut at Celebration Anaheim from April 16 to 19, 2015. The premiere was followed by an encore screening of season one's last two episodes, as well as a panel featuring Filoni, Prinze Jr., Vanessa Marshall (Hera Syndulla), Tiya Sircar (Sabine Wren), Steve Blum (Garazeb Orrelios), and Taylor Gray (Ezra Bridger). The panel also featured an extended look at more content from the second season.[15] After the panel at Celebration Anaheim, it was confirmed that the season would premiere with a one-hour movie in the summer, with episodes airing on Disney XD in the fall.[16] On April 30, 2015, the premiere date of the movie, Star Wars Rebels: The Siege of Lothal, was revealed to be June 20, 2015.[2] On August 28, 2015, it was announced that the episodic premiere would be on October 14, 2015.[3] By the end of October 2015, major development of the season had been completed, with only minor tweaking still in place thereafter.[17] 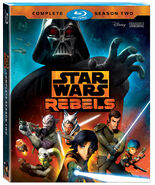