Wookieepedia
Register
Don't have an account?
Sign In
Advertisement
in: Real-world articles, Quotes with obsolete sourcing, Incomplete lists,
and 2 more

For other uses, see Star Wars Year by Year.

"I wanted to have something totally free and fun, the way I remembered space fantasy."
―George Lucas, quoted in Star Wars Year by Year[src]

Star Wars Year by Year: A Visual Chronicle is a Legends reference book written by Ryder Windham, Daniel Wallace, and Pablo Hidalgo that chronicles the history of the Star Wars franchise. It is fully illustrated, and it includes two exclusive prints. The book was published by DK on August 16, 2010, and an updated edition was released in 2012.

FROM THE MOMENT STAR WARS hit movie theaters in 1977, it marked the beginning of a worldwide phenomenon. Now, for the first time, more than three decades of Star Wars is presented in one chronological guide.

Produced in collaboration with Lucasfilm and written by renowned Star Wars experts Ryder Windham, Daniel Wallace, and Pablo Hidalgo, Star Wars Year By Year provides a unique real-world timeline of everything Star Wars—from George Lucas's early inspiration to the development of Star Wars spin-offs and merchandise in the 21st century, as well as the impact of the Saga on popular culture and world events. It's the Star Wars real-life Saga like you've never seen it before—painstakingly produced and exhaustively illustrated! 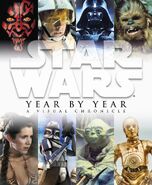