5 BBY[5]
TIE Fighter Trouble is a young readers book based on the Star Wars Rebels episode "Fighter Flight", from Disney–Lucasfilm Press and Scholastic India.[2] It was originally scheduled to be released on March 31, 2015 in the United States, with included stickers, before being canceled in 2014.[3] However, a version of the title without stickers was released under the same name in India in November 2015, though still in the English language.[1] A United States edition would eventually be published as one of eight books included in Star Wars Rebels: Storybook Library.[6]

Ezra and Zeb dodge Imperial patrols while on a special mission from Hera.[2]

Ezra Bridger is in his room on the Ghost, trying to use the Force to telkinetically levitate a bowl, but is tricked by the droid Chopper. A chase ensues, causing him to wake his sleeping roommate, Garazeb Orrelios, who threatens him with physical harm and chases after him. The two end up knocking over a pile of barrels, seriously aggravating Hera Syndulla.

Syndulla orders two off the ship on a supply run to find a meiloorun fruit, then smirks as they leave, having sent them on a "wild-goose chase." They two visit the marketplace in Kothal on Lothal, where Bridger learns fairly quickly from an old friend, a farmer named Morad Sumar, that meilooruns don't grow on Lothal. The sheepish Bridger starts to leave when he spots an Imperial officer trying unsuccessfully to get Sumar to sell his farm to the Empire. Just then, he knocks into Orrelios and an entire crate full of meilooruns.

Bridger tries to buy the crate, but learns that it's been sold to the Empire. Not willing to give up, he snatches a meiloorun from the transport on which it's being carried, but is spotted by a pair of stormtroopers. He and Orrelios race off and gets separated, Orrelios stealing an Imperial TIE fighter, which he then uses to rescue Bridger. The two end up on a wild ride in which the fighter is splattered with meilooruns, obscuring the view. Bridger uses the power of the Force to steer the vessel. The two report in to the Ghost and are ordered to return to by the leader of their rebel group, Kanan Jarrus.

At Morad Sumar's farm, the Imperial officer from before, Supply Master Yogar Lyste, is claiming the farm in the name of the Empire. Bridger and Orrelios spot smoke and Bridger begs Orrelios that they investigate. The two launch an assault and rescue Sumar, his wife and their Aqualish servant. Bridger spots that a meiloorun fruit has survived the crash and claims it for his own. He and Orrelios return to the Ghost and he presents Syndulla with the fruit. Jarrus yells to forget about the fruit and asks what they did with the TIE fighter. Orrelios claims that he crashed it, Bridger grinning that they didn't want it to fall into enemy hands. The two head inside the Ghost for a rest.[4]

TIE Fighter Trouble is an adaptation of the Star Wars Rebels episode "Fighter Flight," closely following the episode's plot.[7] The story omits certain elements, including any appearances of Sabine Wren, and any mention of the supposed life debt between Ezra Bridger and Garazeb Orrelios.[4] 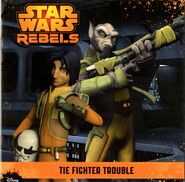 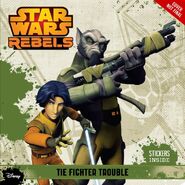 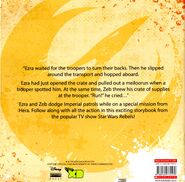 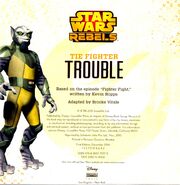