The TIE Reaper Expansion Pack is a supplement to the Star Wars: X-Wing Miniatures Game from Fantasy Flight Games, while also featuring components for X-Wing Second Edition. The expansion features a detailed miniature of the TIE/rp Reaper attack lander. It was released on June 21, 2018, as part of the game's fourteenth wave of expansions.

Engineered as a high-performance troop transport for in-atmosphere missions, the TIE reaper also made its debut in Rogue One. Equipped with advanced ailerons for precise atmospheric maneuvering, thick armor plating, powerful laser cannons, and the capacity to carry elite infantry, this menacing vessel struck fear into Rebel forces across the galaxy.

Any TIE reaper that you choose to fly in your squadron packs a potent strike, rolling three attack dice as its primary weapon attack. A TIE reaper is not especially agile, leaving it with only a single defense die, but with six hull and two shields, these starships are durable enough to stick around on the battlefield. In fact, TIE reapers bring something quite special to your Imperial X-Wing squadrons. This ship bears the unusual jam action that lets you jam nearby ships and prevent them from using a focus, evade, or target lock—opening a wealth of tactical opportunities when you're building your squad or flying into battle. 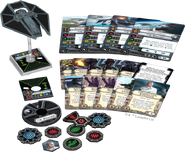 The TIE Reaper Expansion Pack contains a miniatures of the TIE Reaper, plus two maneuver dials and action tokens, as well as pilot and upgrade cards.