"I just wish we could be together, Tula. I feel like an only child."
"Silly Tace. Traveling in style with Princess Leia and all you do is complain."
―Tace had a deep bond with her sister Tula[src]

Tace was a female human musician who was a member of the Melodic Order during the Galactic Civil War. She was also sister to Tula, an Imperial officer. Following the destruction of Alderaan, Tace and her fellow musicians were rescued by Princess Leia Organa and starfighter pilot Evaan Verlaine, who undertook a mission to rescue the survivors of Alderaan.

Tace was manipulated by Tula, who was under Imperial duress, into spying on Princess Leia's whereabouts. Tace was accused of being an Imperial spy but was cleared by Princess Leia, who identified Tula as the real spy. Princess Leia subsequently rescued Tula. Though Tace was initially angry at her sister for serving the Empire, the two sisters subsequently reconciled.

Tace was a member of the Melodic Order, a group of Alderaanian musicians that took a cloister vow not to play in person so that their music would not be polluted by outsiders. While the group traveled around the galaxy performing, they only played to crowds via hologram to honor their cloister vow. The band's leader was Uwa Pareece, who managed the band's performances. Tace had a sister named Tula, who was an Imperial officer.[1]

"Tula, I have to mourn with you. As soon as I can get off this ship, I'm quitting the Order [Melodic Order] and oining you wherever."
"No, you mustn't. Your duty's with the Princess. You must serve her and Alderaan, any way you can."
―Tula manipulating Tace into serving as her unwitting spy[src]

While touring Club Deeja in the Naboo city of Keren, Tace's homeworld of Alderaan was destroyed by the Death Star. Following the Battle of Yavin, Tace asked her manager Pareece is she could send a hologram to her sister on Alderaan to make sure she was alright. However, Pareece, who was still unable to break the truth about Alderaan's destruction to the Melodic Order, asked if she had completely mastered the new Ruuscan song. Since Tace had not mastered the song, she told Tace to talk to her when she had before leaving.[1]

After Princess Leia Organa and the Alderaanian starfighter pilot Evaan Verlaine rescued the group from the trafficker Mul Sanaka and his Besalisk henchmen, Pareece broke the truth of Alderaan's destruction to Tace and the other musicians. The Alderaanian expatriates then escaped aboard the luxury yacht Lord Junn. During the journey, Tace managed to correspond with her sister Tula by computer.[1]

Tace told Tula that she wanted to leave the Melodic Order but Tula told her to continue serving Princess Leia. When Tace told Tula that she missed her, Tula told her to stay in touch and call her every night. Tula requested information about her sister's whereabouts, activities, and the Princess's plans. Unaware that Tula was acting under duress from her Imperial Commander Dreed,[3] Tace promised to contact her sister.[1] 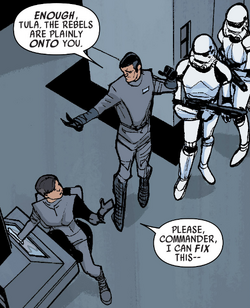 While the Lord Junn was orbiting the planet Sullust, Tace contacted Tula and confided that she felt like an old child without her sister. Tula teased her by telling her that she should be grateful that she was serving Princess Leia. Tula promised to rejoin her sister. When Tace said she was alone, Tula reassured her they were able to keep in touch and told her to call back tomorrow. Acting on Tace's information, Commander Dreed attacked the Alderaan Enclave on Sullust with a platoon of stormtroopers. However, the Enclave managed to escape with the help of Leia and Verlaine. As a result, Leia realized that they had a spy in their midst.[3]

Using their Eyewell to track the Lord Junn's signals, the Alderaan Enclave members Jora Astane and Covis brought a bound and tearful Tace to Princess Leia, accusing her of spying for the Empire. Believing that Tace was innocent until proven guilty, Princess Leia ordered Jorato remove her restraints and to leave them alone. When they were alone, Leia served Tace tea but Tace was reluctant to drink it since she believed that she should be serving her Princess instead.[4]

When Leia pressed Tace to reveal who the calls were from, Tace revealed that the calls were from her sister Tula. When Leia asked where Tula was, Tace replied that she was not sure because her sister was evasive about her whereabouts. Leia then asked Tace what she talked about with her sister. Tace told her that he sister asked about her ship and was interested in Princess Leia's whereabouts and adventure. Leia deduced that those calls originated from an Imperial ship and realized that the Imperial attack on Sullust was no coincidence. Tace confirmed that Tula was not an impostor and the two concluded that Tula was acting under duress.[4]

The moment of truth[]

"When Tula calls tonight, I want you to act naturally. We'll talk about what you should say. Do you think you can do that, Tace?"
"Lie to my sister?"
―Princess Leia briefing Tace[src]

After Princess Leia vouched for Tace's innocence to her other subjects and assigned Pareece and Jora on a diplomatic mission to the Alderaanian diaspora on the planet Espirion, Leia reassured Tace that she was going to do everything she could to reunite her with Tula. Though Tace thought it was impossible to free her sister, Leia reassured her that she had once been the Galactic Empire's prisoner. She instructed Tace to lie to her sister when she called that night.[4]

That night, Tace contacted Tula while Princess Leia observed the conversation. Tace told her sister that they only talked about her and asked Tula about her whereabouts. Tula sensed her sister's voice sounded strange. When Tula apologized for getting her sister into trouble, Tace demanded to know what she meant. However, Tula's controller Commander Dreed realized that the rebels were onto her and ordered his stormtroopers to lock Tula out.[4]

Dreed then tormented Tace about the trouble she had cause Tula. Blaming herself for causing her sister's impending execution, Tace burst into tears. At that point, Leia intervened and offered to trade her freedom for Tula's life. As planned, Leia met with Commander Dreed on the desert world of Skaradosh and surrendered herself to the Empire in return for securing Tula's freedom.[4] Unknown to Tace and Dreed, Leia and Verlaine had a plan to bait the Imperials and escape.[2]

"Your hair...!"
"I don't want to be confused for you. I don't want anyone thinking I'm the traitor."
―Tace's stormy reunion with her sister Tula[src]

Following the exchange, Verlain arrived aboard the Mellcrawler and ambushed Commander Dreed's party. Leia, her entourage, and Tula then escaped aboard the Mellcrawler and joined the Lord Junn and the rest of the Alderaanian refugee fleet above Espirion. In Tula's absence, Tace had shaved her hair. When Tula greeted her sister, a distraught Tace said that she did not want to be confused with her sister and that she did not want anyone thinking that she was a traitor.[2]

Tula tried to apologize and said that they could now be together because she was back. Tace angrily disagreed and pointed out that the Empire was going to murder them because she had given them their position. Tace stormed off into the corridor with Tula pleading with her sister. Despite their falling out, the two sisters reconciled and embraced each other when the Alderaanian fleet battled with Dreed's Star Destroyer. Due to the intervention of Chief Beon Beonel's warship Espirion Multi, the Star Destroyer was destroyed and the refugees were saved.[2]

"But I miss you so much. Then stay in touch. Call me every night and tell me where you're headed, what you're doing, and what the Princess plans for you."
―Tace trusted her sister Tula as a confidant[src]

Tace was a human woman with shoulder-length blue-green hair[1] and green eyes.[4] She had a slim physique and wore a short-sleeve yellow tunic, black and grey spotted leggings, and red boots. She was a singer who was a member of the Melodic Order, which traveled round the galaxy promoting Alderaanian music. Tace was close to her sister Tula and confided in her.[1] Under Imperial duress, Tula exploited her sisterly bond by enlisting Tace as an unwitting spy to get information on Leia's whereabouts.[3]

As with many Alderaanians, Tace was distraught by the destruction of her homeworld. Tace respected Princess Leia as her leader and hero. She was devastated to learn that her sister Tula was facing execution after the Empire discovered that the rebels knew that Tula had been spying on them.[4] Tace's angst with her sister's actions led her to shave her hair to avoid being confused with Tula, who was regarded as a traitor. Though Tace was initially angry with Tula for endangering the Alderaanian refugees, the two sisters reconciled during the battle above Espirion.[2]

Tace first appeared in the second issue of the 2015 Marvel Comics series Star Wars: Princess Leia. She was created by Mark Waid, drawn by Terry Dodson, inked by Rachel Dodson, and colored by Jordie Bellaire.