Wookieepedia
Register
Don't have an account?
Sign In
Advertisement
in: Real-world articles, Audiobooks without ISBN, Book stubs,
and 2 more

Tales of the Jedi: Dark Lords of the Sith (audio)

Tales of the Jedi:
Dark Lords of the Sith

Star Wars: Tales of the Jedi

'Darth Vader was a Dark Lord of the Sith. Discover the terror of the Dark Lords who preceded him in this stunning sequel to Tales of the Jedi.'

Ulic Qel-Droma and Nomi Sunrider and young Jedi Knights drawn into a battle for the survival of the Old Republic. But as the power of the evil Sith spreads across the galaxy, it threatens the existence of the Jedi themselves, and draws one of their greatest allies over to the dark side! 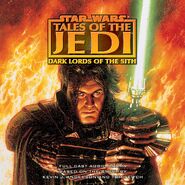