I don't care what the EU says. Eeth Koth appears in both Episode III and the Clone Wars microseries. No, I swear I'm not talking about Agen Kolar. His skin is darker, anyway.--Darth Fisto 03:50, 15 May 2005 (UTC)

In Attack of the Clones when they are on the gun ships and there being shot at, when u see Yoda, Mace Ki Adi Mundi and Kit when the gunship blows up nex to him you can see a Lightsaber in the gunship when it blows and its Eeth!

Sorry to (re)start the debate, but...

Hi there. I'm sorry if you guys already felt that you had a consensus going on the issue of Eeth's death, but I'm afraid that the current version doesn't hold water, IMHO. Issues of the names listed in the Ep. III script or the Clone Wars vol.2 credits aside; the character featured in two separate scenes of CWv2 is clearly Eeth Koth, not Agen Kolar. Although I know that the latter was originally supposed to be the former, since it has been established that they are different characters I don't think that one can treat them as interchangable.

There is no way you can mistake them; Koth has a MUCH lighter yellow-brown skintone compared to Kolar's dark black-brown, the actors under the makeup have completely different racial characteristics, and most importantly Koth has distinctive line tattos on his face while Kolar does not. Check out the two pictures below. Now compare them to CWv2. The character there has the lighter skin and the tatts, ergo he must be Koth. I simply don't see that there is any "matter of opinion" about this.

Now, I grant you it is possible (as the credits would indicate) that the CWv2 character was supposed to be Kolar, but I honestly believe that is neither here nor there. After all, Kolar was supposed to be Koth in Attack of the Clones until they retroactively declared that he was a separate character. In no instance is either character's name actually spoken anyway. And as has already been discussed, the Ep. III script contains a similar mistake.

As far as canonicity is concerned, you might argue that both Inside the Worlds of Star Wars: Attack of the Clones and CWv2 are technically both C-Canon, but I think anyone would agree that a televisual source such as CWv2 (which has been categorically shown to have canonical implications) would superceed the reference book. Does anyone else agree with me on this?

I think that this is basically a similar case to that of K'Kruhk, where he clearly was supposed to die at the hands of Grievous in CWv1, but when this was later contradicted by the Star Wars Republic comic it was retconned as a "Whiphid healing hibernation" in which he was mistaken as being dead. Clearly, Koth survived Geonosis as it is inarguable that it is him in CWv2; we're just waiting for some kind of canonical explanation.

I hope some other folks will consider this debate and make some informed contributions. Cheers, DarthFistula

Hi there. I've been reading this debate with some interest and I'd like to throw in my opinion at this point. Although QuentinGeorge's argument seems well backed-up (and very forcefully expressed!), I do kind of feel that he's just restating his case now. And I'm not sure how he can say so confidently what the makers of the clone wars series actually "intended", unless he can quote an actual statement from them about the matter. But as to the question of Kolar's membership on the council, he's certainly got a good point there. At any rate, I think his view is quite clear by this point, so I'd personally be keen to hear from even more other users on this matter. Get a few fresh opinions, hopefully.

Personally, I remain unconvinced one way or another. White the Attack of the Clones-era book admittedly does state Eeth Koth died and the cartoon Zabrak is not referred to (in the scene) by name, I also find it pretty hard to simply discount the cartoon Eeth Koth as an "animation mistake" since he was quite obviously drawn to look like Koth, even if the writers may have had Kolar in mind.

Here's a challenge to those of you who are strongly in the "Koth died at Geonosis" camp; can anyone find any in-universe sources (comics, novels etc.) that make any kind of reference to Eeth Koth's death? Can anyone supply any difinitive in-universe corroboration (more than the circumstantial, like Agen Kolar being on the council) for Koth's demise? It would certainly add weight to that side of the argument.

EETH KOTH IS CANONICALLY DEAD. THIS IS SUPPORTED BY ALL SOURCES. IF YOU SEE HIM IN THE CARTOON, THEN THAT'S YOUR PROBLEM. NOT MINE. QuentinGeorge 11:18, 15 April 2006 (UTC) 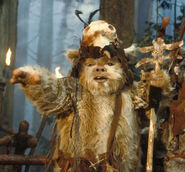 And crap! Look at Teebo!

Different coloured skin AND hair! Another imposter!
They must be totally different characters! Clearly we must retcon this! QuentinGeorge 11:21, 15 April 2006 (UTC)

Ahem. Well, it seems like my side of the argument isn't going to get anywhere here. I don't know about the other "not dead at Geonosis" people, but it's quite clear to me that standard of proof here is highly reliant on Lucasfilm declarations etc rather than the evidence of one's own eyes. Which is fine, I guess; it is the official canon system after all. If that's ultimately the sole determining factor in debates here at Wookieepedia then I for one am not going to push uphill any further.

However, I still rather object to QG's aggressive attitude ("You must be blind". Lovely...!) and am frankly disappointed that Wookieepedia indulges users with the same short tempers and ill manners as Wikipedia is infamous for. I don't mind people disagreeing with me, I don't even mind people proving me "wrong" with cumulative evidence, but I don't like seeing fellow new users like PressPass being attacked for their opinions, much less being dealt with rudely myself. I thought this would be a friendlier place.

Finally, although I accept that this debate is over (at least in as much as the contrary position is no longer being tolerated), I would still be interested purely for the sake of curiosity if any of you would please be so kind as to answer the call which DarkLordOfTheBith put out to locate any in-universe references to Eeth Koth's death, or for that matter any kind of (polite) response to my own question about why the ligitimacy of the original statement (upon which all subsequent reaffirmations are surely based) of Koth's death should not be thrown into question by having Sora Bulq's obviously incorrect death declared in the same sentence. Personally I'd just like to know about these two points for my own peace of mind, and you chaps obviously know so very, very much more about all this than me.

Eezh Koth appears in Wild Space. Is he dead or is he not ? Clone Commander Lee 28th December

Revenge of the sith (the game)

Sharad Hett was Eeth Koth's padawan until 47 bby when he went missing. Shouldn't that be mentioned?

Eeth Koth fights in the arena? Where? If you look at the circle of survivors, only one Zabrak is present, which is Agen Kolar. Yes, Eeth died in the gunship, but I think that he was already on the gunship; maybe he came with Yoda to Kamino and came back to Geonosis with him, where he died. -- Cato Neimoidia 02:56, 6 March 2007 (UTC)

Of course he is dead

ok first of all. yes. he died in Ep II during the battle of geonosis. We have that pretty clear. But what has no base, and have never been explained: Actually I remember that it was a fan that wrote in the wikipedia, after the Ep II release, that he was in a LAAT, where he died, without any support.

In the same Gunship traveled, Agen Kolar, Bultar Swan, "Eeth Koth" and another Jedi. First of all, he was never seen in the arena (we know all this Agen Kolar Conflict, but pittung this ona side. it has no sense becuase he was never there) and he never jumped into that Gunship that was shot. The same Gunship that if eventually was shot, and destroyed, were Agen Kolar, and Bultar Swan survived, but Eeth Koth not. That of course has no sense at all. What leads us to the conclution that THAT GUNSHIP what we saw in the movie wasnt theirs.

So Eeth Koth really died in Geonosis, but maybe in the excecution Arena, or in the space battle, or in the battle outside the Arena. That is something it hasnt been cleared yet, and senseless that has been accepted in wookieepedia as canon (I mean that that Gunship was shot and he was there etc).

Shouldn't there be some mention of the fact that after Episode 1, Eeth Koth attempted to investigate the Zabrak Sith that killed Qui-Gon on Naboo? Kalin Sorn 20:00, 3 June 2008 (UTC)

Chee stated in his blog, Koth have died. But his blog isn't an official source. It isn't a even source, just a collection of other sources. He refers to the ItWoSW. I think his statements souldn't be read as written in stones. He just presents the actual official answers. But this can change in time. For example he stated repeatedly the dark trooper are only game-mechanisc in non-Dark Forces computer games. Later the TFU RPG book invented the Dark Trooper Phase 0 project to solve this continuity error. This override Chee's previous 'canon' statement.

Previously some users said there are no sources of Koth's survival other than the CW cartoon. The cartoon was retconed to show Agen Kolar. I agree with this. Some of the extra videos about creating the cartoon show drawers working from the EP1 Visual Dictionary instead of the EP2 VD. And other, like Adi Gallia are also in the cartoon's Coulncil instead of Strass Ailee. So the cartoon isn't a good source to support Koth's survival.

Now there is the Wild Space novel to support his survival. It is as canon as the comics that override Sora Bulq's death. I think if a part of a sentance in the ItWoSW is overriden, other parts of the same sentance can also be retconed.

Also the RPG sourcebooks are often overriden. Think about C'boath's 3 or 4 sapatere birthdate. The Databank doesn't say anything about his death.

OK- so its been confirmed that Eeth appears in Grievous Intrigue and people are skeptical about this. Remember that just because the Gunship exploded doesn't mean he died. Grievous himself is evidence of this. The article says

A Jedi Master is taken hostage and tortured by General Grievous. Anakin, Obi-Wan, and Adi Gallia devise a daring rescue plan but they soon realise the General has a plan of his own.

Now the key word in that quote is torture. Eeth's article tells us that Eeth had the rare Force Power Crucitorn , enhancing his natural Zabrak ability to withstand torture. Also, Eeth "died" on Geonosis. Grievous was on Geonosis. He could have easily took the near-dead Jedi Master held him hostage, and tortured him. He lasted so long without giving in because of his Cruticorn and Zabrak abilities.

The databank claims that Koth's character design was used in Clone Wars; this info in itself is nothing new. Until we get confirmation that that character is intended to be Koth, Clone Wars Chapters 21 and 22 should remain as possible appearances. Otherwise, we're speculating. I've asked Leland Chee over on TOS forums if that character has been retconned to be Koth rather than Kolar, but until we get an answer, we don't know for sure. Menkooroo 16:02, December 30, 2009 (UTC)

Retrieved from "https://starwars.fandom.com/wiki/Talk:Eeth_Koth/Legends?oldid=2903420"
Community content is available under CC-BY-SA unless otherwise noted.