Will Satine and that Mandalorian guy appear in this episode? Or is that just speculating for now? Maris Brood 17:10, December 26, 2009 (UTC)

The Death Watch Mandalorians make an appearance and is one the Focuses of the Episode. Also, Obi-Wan faces against someone who uses a Black Colored Lightsaber.Altyrell 02:31, January 23, 2010 (UTC)

Look, he called it a lightsaber and it projected a blade of energy out of an emitter; thus, it's what one would call a "lightsaber". The Clone Wars Episode Guide on the Lucasfilm website confirms this. I have no doubt, however, that it works at least slightly different than a normal lightsaber considering it sounds so unusual. It's also doubtful whether it is of Jedi or Sith origin, though I would personally assume Jedi since the Mandalorian could have just as easily said it was taken from a Sith Temple during the fall of the Old Republic. —Unsigned comment by 69.115.215.94 (talk • contribs).

This episode threw me off. Previous sources have stated that Mandalore was led by the Manda'lor who was Jango Fett. Then this episode states that there is a government. Also, Mandalore looks more like a desert wasteland that stated before. What is the official ruling?--RC 1138

Per everything we were given in the Essential Atlas and stuff to retcon the New Mandalorians, should Mandalore be linked instead to Kalevala? Concordia and Sundari changed to Kalevala's moon and capital, respectively?--Bella'Mia 04:26, January 30, 2010 (UTC)

What does he mean? Edit

why does the traitor guy (can't remember his name) say that the lightsaber he had was obtained "at the fall of the old republic"? Isnt this placed during the reign of the old republic? —Unsigned comment by 207.40.239.118 (talk • contribs).

I took it to mean at the end of the New Sith Wars, during the Hundred Year Darkness. Palpatine's mention of a "Republic which has stood for a thousand years" despite the already established 24,000 year old Republic was retconned in the same way. —Unsigned comment by Axinal (talk • contribs).

Considering this episode has caused a huge controversy and a lot of anger among EU and Traviss fans, there needs to be a controversy explaining the issues. And fanon needs to be kept off until some official word (besides the Atlas entry which might need fixing as well) comes forward as to how or IF they're going to be able to fix this mess. 24.45.41.160 10:09, February 1, 2010 (UTC)

What was meant by the anon who added Tatooine as a Human subspecies? Was this meant in reference to Anakin Skywalker? Should it be kept? This is the first time I have ever heard a character refered to as such. If this is a keep, should it be changed to Tatooinian and allow the discussion to continue here? --Darth Shohet 01:01, February 2, 2010 (UTC) 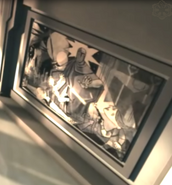 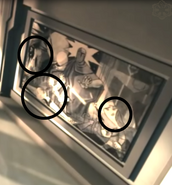 Check this out: It was on Vizslas office wall. I found this pic over at Swtor forums on a thread about this episode: This is that one Pablo Picasso painting of the barn with mutilated people in it, but with a Mando photoshopped in. Also, a a few of the figures (notable the one in the bottom right) has been slightly edited. Anyone cathc tthis before? --Mr. Clonehunter(Report your W.M.D.) 02:05, February 2, 2010 (UTC)

In the list of characters there are some like Zinn Paulness and Dantum Roohd who are listed as appearing in flashbacks. Whilst they do only appear in the opening newsreel and not in the episode proper, their appearances are still connected to the events of the episode because they are seen meeting with Satine. Labelling them as appearing in flashbacks may lead some people to think that they only appear in clips from other episodes - like Bail Organa and Philo do for example.

Maybe there should be a distinction between the two types of flashback - those from previous episodes and those that are new and actually related to the episode they're part of. Personally I would just list such characters as appearing in the episode, even though they were only in the newsreel, since the shots were made for that episode. —Unsigned comment by Captain Yossarian (talk • contribs).

The point is that listing everything from the newsreel as 'flashbacks' implies it consists only of clips from previous episodes, not new material. There needs to be a distinction between flashbacks that are from other episodes and ones that are part of the current episode's story.

For example, in The Mandalore Plot, Bail Organa appears in a flashback to Hostage Crisis. Zinn Paulness appears in a flashback but it's a new shot made for The Mandalore Plot. However, if all newsreel appearances are listed simply as 'flashbacks' there is no way of knowing the context in which the characters appeared. People not fully conversant with the episode may assume that all flashbacks are clips from previous episodes and therefore miss the point that certain characters, locations etc, may only appear in the newsreel, but their appearance was actually part of the episode itself.

It's worth mentioning here because this episode demonstrates the problem well. There are characters that appear in both the Hostage Crisis clips and the newly made clips. But since everything that's only in the newsreel is listed as a flashback, it may not be totally clear to everyone what relevance anything has to the episode in question. For example, Bail Organa appeared in a flashback but is not especially relevant to The Mandalore Plot. Dantum Roohd appeared in a flashback but he is relevant to the episode because he was meeting with Satine and others.

Using the blanket term 'flashback' to describe everything that appears in the newsreel is not a good idea because it's devoid of context. If most of the newsreel is made up of clips from previous episodes then anything that is new gets lumped in with it. Anyone who does not know much about the episode will find it difficult to determine how those appearances are relevant to the episode. Captain Yossarian 23:40, February 3, 2010 (UTC)

Retrieved from "https://starwars.fandom.com/wiki/Talk:The_Mandalore_Plot?oldid=7515150"
Community content is available under CC-BY-SA unless otherwise noted.