The Trouble with Squibs

Tatooine Ghost is a standalone novel written by Troy Denning. It was published by Del Rey in March 2003 as hardcover and reprinted in paperback in December of the same year. The novel's story takes place directly before the events of Heir to the Empire, and was hailed as the first Expanded Universe novel to bridge the gap between the prequel trilogy and original trilogy characters.

The novel also includes, as supplements, the eBook A Forest Apart and short story Corphelion Interlude, both written by Troy Denning. Narration for the audio version of Tatooine Ghost was performed by Jonathan Davis. In the paperback version of the novel, an interview between Del Rey and Troy Denning is included at the end.

The deaths of Darth Vader and Emperor Palpatine, and victory at the Battle of Endor by no means spelled the end of the Empire. In the aftermath, the New Republic has faced a constant struggle to survive. Now a new threat looms: a masterpiece of Alderaanian art—lost after the planet's destruction—has resurfaced on the black market. It conceals a vital secret—the code used to communicate with New Republic agents undercover within the Empire. Discovery by Imperial forces would spell disaster. The only option is recovery—and Han, Leia, Chewbacca, and C-3PO have been dispatched to Tatooine to infiltrate the auction.

When a dispute at the auction erupts into violence, the painting vanishes in the chaos. Han and Leia are thrust into a desperate race to reclaim it. As they battle against marauding TIE fighters, encroaching stormtroopers, and Tatooine's savage Tusken Raiders, Leia's emotional struggle over the specter of her infamous father culminates in the discovery of an extraordinary link to the past. And as long-buried secrets at last emerge, she faces a moment of reckoning that will forever alter her destiny… and that of the New Republic.

Taking place some time before the novel Heir to the Empire begins, Leia Organa Solo, her husband Han, his Wookiee companion, Chewbacca, and their protocol droid C-3PO travel to the desert planet Tatooine. Their mission is to recover an Alderaan work of art, titled the Killik Twilight, because within Killik Twilight lies a communications device that acts as a link between the New Republic and their spies acting as undercover agents all around the dying Galactic Empire. The Millennium Falcon gets into a space duel with Imperial forces, led by Grand Admiral Thrawn, but manages to arrive on the surface of Tatooine and dock under cover from the enemy forces. Then, under disguises at a local cantina, the Solos attend an auction there in order to retrieve the Killik Twilight. During the bid, one of the items on sale is a holographic image of the late Anakin Skywalker back in 32 BBY just after he won the Boonta Eve Podrace. Leia is distraught at the image of what had once been her father, whom she has only known as the evil Darth Vader in the Rebel Alliance's war with the Empire. The image is sold, nevertheless, to another auctioneer, and the disturbance of the image wrought upon by Leia leads into a conversation between her and Han, discussing the prospects about having children. Leia is reluctant to do so, because of her biological family's line in the Force and of her father's legacy as Vader. She fears that it may be too possible for whatever children she and Han tend to bear one day will fall to the dark side.

By the time the Killik Twilight is up for grabs, violence breaks out from the Imperial forces attending the auction who intend to retrieve the art piece. During the fight, the Killik Twilight is lost. And so Han and Leia embark on a journey through Tatooine in order to retrieve the art piece, battling the Imperial forces and Tusken Raiders with the help of Jawas and a Squib trio, Emala, Sligh and Grees. During their voyage, Leia finds out more about her late father's past, and runs into Anakin's old friend, Kitster Chanchani Banai, who reveals to her what her father was like before he left Tatooine under the guidance of the late Qui-Gon Jinn. Leia also retrieves a holojournal recorded by Shmi, revealing details of her life in between Anakin's departure from Tatooine to his return to his home planet. After Leia saves Han from being dehydrated and lost in Tatooine's vast, dry desert, it is implied that they sleep together.

Eventually, Leia finally comes to terms with her father's legacy and no longer fears that her children will fall to the dark side, after she learns that her father was once a young, innocent boy, and a fairly decent individual prior to his fall as Vader. She and Han then retrieve the communications device from the Killik Twilight while the art piece itself is taken by Grand Admiral Thrawn's forces. The Solos, Chewbacca and C-3PO leave Tatooine, mission accomplished, and Leia at peace with her dead father.

The Killiks, who first appear in this novel, would later be fully delved into in the Dark Nest Trilogy.

There is a scene (one chapter ends with the build-up and the next chapter begins immediately after) which strongly implies that Han and Leia have slept together. As this book is set not that long before Heir to the Empire (in which Leia already knows she is three months pregnant), this could well be when Jacen and Jaina were conceived.

This is the first New Republic era novel to feature Luke Skywalker as a minor character, though he also had a minor one-scene appearance in X-Wing: The Krytos Trap.

On the dust jacket of the hardcover and the paperback editions, the era sticker is set to be in the Rebellion era, when it should be in the New Republic era.

At one point in the story, Chewbacca uses his Wookiee claws in front of Leia. In Heir to the Empire, Leia states she never knew Wookiees had claws.

The novel refers to Wedge Antilles leading Wraith Squadron on a mission. However, by the end of X-Wing: Solo Command, set before this novel, the Wraiths are recommissioned as an intelligence unit and command passed to Garik Loran, with Antilles reassuming command of Rogue Squadron. However it is possible that the operation was a joint intelligence/fighter command mission.

This is a gallery of the different cover variations of Tatooine Ghost. 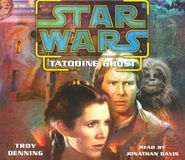 Russian Hardcover - Дух Татуина
Add a photo to this gallery

In other languages
Retrieved from "https://starwars.fandom.com/wiki/Tatooine_Ghost?oldid=9193989"
Community content is available under CC-BY-SA unless otherwise noted.