The Art of Solo: A Star Wars Story

"This is another of those really beautiful art books that shows various pieces of concept art that went into this film. You see the evolution of Solo through this book, and the insight that Phil gets from everyone in the production is incredible."
―Michael Siglain[src] 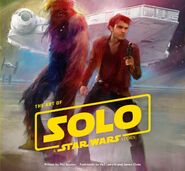 Cover art under dust jacket
Add a photo to this gallery

In other languages
Retrieved from "https://starwars.fandom.com/wiki/The_Art_of_Solo:_A_Star_Wars_Story?oldid=10189358"
Community content is available under CC-BY-SA unless otherwise noted.