The Art of Star Wars: The Rise of Skywalker

The Art of
Star Wars: The Rise of Skywalker

The Art of Star Wars: The Rise of Skywalker is the official behind-the-scenes companion to the definitive conclusion of the Skywalker saga. Featuring conceptual sketches and artwork, keyframe and matte paintings, costume and vehicle designs, storyboards, and much more, this book offers fans exclusive access to the Lucasfilm art department's creative process.

J.J. Abrams (Star Wars: The Force Awakens) returns to direct this final installment of the Star Wars sequel trilogy. With a script co-written by Abrams and Academy Award winner Chris Terrio (Argo), the film rejoins Rey (Daisy Ridley), Finn (John Boyega), and Poe (Oscar Isaac) a year after the events of The Last Jedi. Led by General Leia Organa (Carrie Fisher, in her final film appearance), the remnants of the Resistance move toward a final confrontation with Kylo Ren/Ben Solo (Adam Driver) and an increasingly emboldened First Order—all while reckoning with their past and their own inner turmoil.

The Art of Star Wars: The Rise of Skywalker is the definitive chronicle of the vision, innovation, and creativity that helped guide the Skywalker saga to its conclusion. 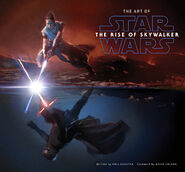 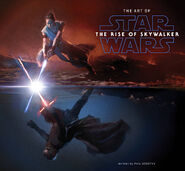 US hardcover (not final) 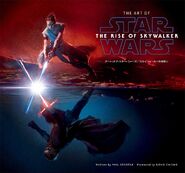