0 BBY–34 ABY[2]
The Chewbacca Story is a Studio Fun International Star Wars young readers story by Benjamin Harper focused on Chewbacca. It was published on August 23, 2016 and comprises 32 pages.

The story retells the adventures of Chewbacca as originally presented in the films A New Hope, The Empire Strikes Back, Return of the Jedi, and The Force Awakens.

This complete retelling about Chewbacca comes with a supercool toy Chewbacca head that makes sounds just like a Wookiee!

This full-color, interactive retelling of the Chewbacca story features Chewbacca highlights from A New Hope, The Empire Strikes Back, Return of the Jedi, and The Force Awakens. The collectible Chewbacca toy features a button-activated Wookiee sound that kids will be prompted to start throughout for a feature-rich storytime experience. The front cover is die-cut over the sculpted head to allow Chewbacca to appear on every spread of the book.[1] 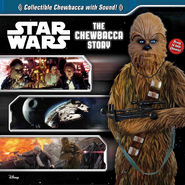 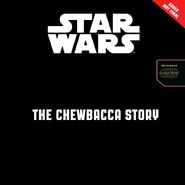 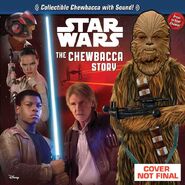