The Crystal Star is a 1994 bestselling novel written by Vonda N. McIntyre and published by Bantam Spectra. The novel is set ten years after the Battle of Endor.

Princess Leia's children have been kidnapped. Along with Chewbacca and R2-D2, she follows the kidnappers' trail to a disabled refugee ship, from which children are also missing. Here she learns of a powerful Imperial officer with a twisted plan to restore the Empire. Meanwhile, Han Solo and Luke Skywalker are cut off from Leia by the death of a nearby star, which has caused a disruption in the Force. They have gone to the planet Crseih to investigate a report of a lost group of Jedi. Instead they find a charismatic alien named Waru whose miraculous healing powers have attracted a fanatic following. As Leia follows the path of her children across space, Luke and Han draw closer to the truth behind Waru's sinister cult. Together they will face an explosive showdown that will decide the survival of the New Republic…and the universe itself!

On Munto Codru, Jacen, Jaina and Anakin are kidnapped by a man named Hethrir. Their mother, Leia Organa Solo, immediately dispatches a rescue operation. Meanwhile, Han Solo and Luke Skywalker go to Crseih Station and learn of a secret cult (formed around Waru, a being from another dimension) that influences the Crystal Star.

Hethrir continues to manipulate the children for several days. He leads the Empire Reborn, an organization looking to resurrect the Galactic Empire.

On page 114, during a scene when Luke activates his lightsaber, it is said to cast a blue light. However, at the end of The Last Command he gave his first blue lightsaber to Mara Jade and carried his self-constructed green lightsaber with him.

Han Solo is said to have a beard in the novel, but he appears clean-shaven on the cover.

The Crystal Star was a New York Times bestseller, and the sixth consecutive Star Wars novel to reach the bestseller list. It was critically panned, however, having been described as "the most derided novel in the entire Expanded Universe."[3] 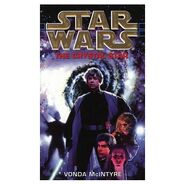 Russian - Хрустальная звезда
Add a photo to this gallery

In other languages
Retrieved from "https://starwars.fandom.com/wiki/The_Crystal_Star?oldid=10235232"
Community content is available under CC-BY-SA unless otherwise noted.