Wookieepedia
Register
Don't have an account?
Sign In
Advertisement
in: Real-world articles, Quotes with obsolete sourcing, Read-Along Storybook and CD

Episode VI: Return of the Jedi Read-Along Storybook and CD

"A long time ago in a galaxy far, far away, there was a scavenger, a soldier, and a lost droid. This is the story of Star Wars: The Force Awakens. You can read along with me in your book. You'll know it's time to turn the page when your hear this sound.... Let's begin now."
―Michael D. Hanks[src]

The Force Awakens Read-Along Storybook and CD is a young-readers adaptation of the film Star Wars: The Force Awakens. It was written by Elizabeth Schaefer, illustrated by Brian Rood, and released by Disney–Lucasfilm Press on April 5, 2016 by Disney–Lucasfilm Press. The media includes music and dialogue from the film, and is narrated by Michael D. Hanks.

Since the story is truncated into a 20-minute format, it skips over the rathtars aboard the Eravana. Additionally, it includes deleted scenes such as Finn presenting his blaster and Poe Dameron's dialogue from "X-wings Prepare for Lightspeed" deleted scene. 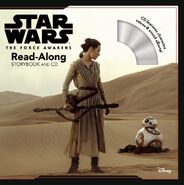 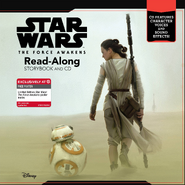