Droid World was a book-and-record in the Star Wars: The Further Adventures series. It was an adaption of Star Wars 47: Droid World.

The Rebel Alliance have captured a damaged new model of Imperial warbot on Xeron and decide to ask the assistance of the droid populated space station known as Kligson's Moon in repairing the droid so the Alliance technicians can study it. Kligson agrees to repair the droid, but R2-D2 and C-3PO must accompany the warbot to observe the operation since Kligson intends to keep the droid after it's repaired. However, another droid on Kligson's moon has other ideas as the former Imperial droid Zee-Exthree plans to use parts of the warbot to repair his own war droid and lead a revolt against Kligson. But Kligson had anticipated this and sent a decoy to lure Zee-Exthree and his followers out into the open when he would launch his own warbot against them. With the battle over, R2-D2 and C-3PO record the schematics of the warbot and return to the Rebels, while Kligson moves his station from its current orbit to a more secret location where the Empire cannot find it.

This is a gallery of the different cover variations of Droid World. 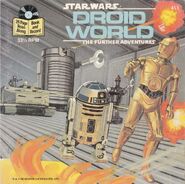 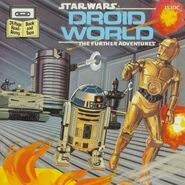 Droid World book and tape
Add a photo to this gallery

Retrieved from "https://starwars.fandom.com/wiki/The_Further_Adventures:_Droid_World?oldid=9813365"
Community content is available under CC-BY-SA unless otherwise noted.