The High Republic: Light of the Jedi

The High Republic: Light of the Jedi is a canon novel written by Charles Soule. It is the first volume in the Star Wars: The High Republic publishing campaign, and was published on January 5, 2021 by Del Rey.

The events of the novel are set two centuries before the events of Star Wars: Episode I The Phantom Menace, and the story follows Jedi Avar Kriss as the Jedi Order faces a new threat.

Long before the First Order, before the Empire, before even The Phantom Menace. . . Jedi lit the way for the galaxy in The High Republic

It is a golden age. Intrepid hyperspace scouts expand the reach of the Republic to the furthest stars, worlds flourish under the benevolent leadership of the Senate, and peace reigns, enforced by the wisdom and strength of the renowned order of Force users known as the Jedi. With the Jedi at the height of their power, the free citizens of the galaxy are confident in their ability to weather any storm. But even the brightest light can cast a shadow, and some storms defy any preparation.

When a shocking catastrophe in hyperspace tears a ship to pieces, the flurry of shrapnel emerging from the disaster threatens an entire system. No sooner does the call for help go out than the Jedi race to the scene. The scope of the emergence, however, is enough to push even Jedi to their limit. As the sky breaks open and destruction rains down upon the peaceful alliance they helped to build, the Jedi must trust in the Force to see them through a day in which a single mistake could cost billions of lives.

Even as the Jedi battle valiantly against calamity, something truly deadly grows beyond the boundary of the Republic. The hyperspace disaster is far more sinister than the Jedi could ever suspect. A threat hides in the darkness, far from the light of the age, and harbors a secret that could strike fear into even a Jedi's heart.

The freighter Legacy Run, under Captain Hedda Casset, is making a routine run into the Outer Rim Territories, carrying around 9,000 passengers who are moving to the edge of the galaxy and some cargo. Captain Casset goes on her evening rounds around the ship, scolding young Serj Ukkarian for trying to access age-inappropriate holos and checking to make sure a shipment of volatile liquid Tibanna is properly secured. Just after she returns to the bridge, however, something almost impossible happens: an obstacle in hyperspace, dead ahead, with seconds to impact. Casset tries to steer the Legacy Run around the obstacle, but the starship's great age – over a century – catches up with it, and she only has time to seal the passenger compartments before dying as the Legacy Run is ripped apart.

In the Hetzal system, scantechs Merven Getter and Vel Carann are respectively doing and not doing their jobs onboard the outer-system monitoring station when they are jolted into awareness by the sudden detection of multiple exits into realspace. The new arrivals aren't scheduled, and the two quickly realize that the star system is in grave danger. They manage to send a warning back to Hetzal Prime, but their space station is atomized before they can reach their shuttle.

Star Wars: The High Republic was originally scheduled to launch with The High Republic: Light of the Jedi on August 25, 2020,[3] but the release date was revised to January 5, 2021 due to general marketplace delays.[4]

On December 15, 2020, the short story "Starlight: Part One - Go Together" was released in the 199th issue of Star Wars Insider. The story, which was also written by Soule, was advertised as a prequel to Light of the Jedi.[5]

The character Avar Kriss, who appears in The High Republic: Light of the Jedi, first appeared in the third issue of Charles Soule's comic book miniseries Star Wars: The Rise of Kylo Ren.[6]

An early excerpt of Chapter 1, released on IGN on June 22, 2020, had numerous differences from the final version. The Legacy Run was only sixty years old instead of well over a century. Its model name was changed from Class-A Modular Freight Transport to Class A modular freight transport. References to Captain Hedda Casset's age, said to be slightly over sixty, were removed. Saberfish came from Spira instead of Tibrin. Abregado-rae is now referred to by its full name. Finally, the species makeup of the alien passengers aboard the Run was changed from Trandoshans, Bith and an Ortolan to Ardennians, Givin and a Lannik.[7]

All pre-released excerpts of Light of the Jedi gave the name of the organization which owns the Legacy Run as the Byrne Guild.[7] However, the excerpt of The High Republic: Into the Dark published in The High Republic Free Digital Sampler spelled it as the "Byne" Guild, while the excerpt of Light of the Jedi in the same sampler still used the "Byrne" spelling.[8] Ultimately, the final version of the novel clarified that "Byne" was correct.

Shai Tennem and Estala Maru are both referred to as female in the novel. However, the short story "Starlight: Part One - Go Together" referred to Tennem as a male,[9] and The High Republic 1 comic author stated that Maru was male.[10]

Cohmac Vitus is said to be a Jedi Knight. However, the excerpt of Into the Dark published in the digital sampler refers to him as a Jedi Master.[8]

In the eBook edition, Rana Kant's first name is misspelled as "Rano" when the character is first mentioned during a Jedi High Council meeting.

Sskeer's lightsaber is described as having a green blade. However, The High Republic comic series depicts him with a blue lightsaber.

During the Supreme Chancellor's speech at the Starlight Beacon's dedication ceremony, "Vel Borta" is included among a list of the dead that she named. This appears to be a combination of the names of minor characters Vel Carann, who did die, and General Borta, who did not. 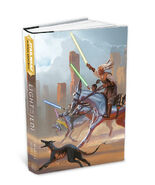 Out of Print special edition by Jama Jurabaev

Full cover of the Out of Print edition

In other languages
Retrieved from "https://starwars.fandom.com/wiki/The_High_Republic:_Light_of_the_Jedi?oldid=9687222"
Community content is available under CC-BY-SA unless otherwise noted.