"The Long Arm of the Hutt"

"The Long Arm of the Hutt" is a 46-page bonus roleplaying adventure from Fantasy Flight Games that was released as a downloadable supplement to the Star Wars: Edge of the Empire Beginner Game—part of the Edge of the Empire system of Fantasy Flights's Star Wars roleplaying game series. It is made available by Fantasy Flight as a free PDF eBook from their website on December 14, 2012. Two eight-page supplementary character folio booklets are also available. The adventure continues the story begun in Escape from Mos Shuuta.

The included adventure in the Star Wars: Edge of the Empire Beginner Game is entitled "Escape from Mos Shuuta." Presuming that all goes well for the Hero Players, by the end of the adventure they will have - Spoiler alert! - escaped from the crime-ridden Tatooine spaceport of Mos Shuuta and are ready to embark on a galaxy-spanning adventure!

Even if the Hero Players have been successful in that adventure, that doesn't mean they've escaped their own shadowy pasts. After all, even in a galaxy as expansive as that in Star Wars, you carry your reputation (and your problems) with you wherever you go. Can the players escape the grasp of a ruthless and influential crime lord once and for all?

...FFG is pleased to announce the release of "The Long Arm of the Hutt" (low res pdf, 2.4 MB) a totally free pdf adventure designed to serve as a sequel to "Escape from Mos Shuuta"! Now available on our support page, "The Long Arm of the Hutt" continues the action immediately after "Escape from Mos Shuuta." Throughout this comprehensive 46-page adventure, the Hero Players will travel from the Ryll mines of Ryloth to the noble courts of Geonosis as they seek to escape the ire of a powerful Hutt crime lord. With an exciting blend of action and intrigue, "The Long Arm of the Hutt" is an ideal next-step for groups just finding their stride in the Star Wars: Edge of the Empire: Beginner Game. The multi-session adventure is also suitable for veteran roleplayers, providing 20 hours or more of additional gameplay!

Two character sheets, one for "Mathus the Technician" and the other for "Sasha the Explorer," were made available by Fantasy Flight Games as free downloadable PDF files on December 14, 2012, for use with The Long Arm of the Hutt. The character sheets continue the story begun in Escape from Mos Shuuta. 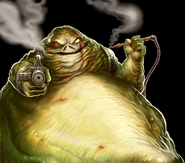 Front cover character art
Add a photo to this gallery

Retrieved from "https://starwars.fandom.com/wiki/The_Long_Arm_of_the_Hutt?oldid=9893666"
Community content is available under CC-BY-SA unless otherwise noted.