Sometime after the Battle of Yavin

The Maverick Moon is a children's storybook released in 1979 and published by Random House. It was written by Eleanor Ehrhardt (uncredited in the book itself) and illustrated by Walter Wright. It is one of three such children's Star Wars storybooks released that year, along with The Wookiee Storybook and The Mystery of the Rebellious Robot. It takes place at an unspecified time after Star Wars: Episode IV A New Hope.

Luke Skywalker is enrolled in the New Academy for Space Pilots on an unidentified planet. Luke and his classmates are called the Planetary Pioneers, and they are training to pilot transport ships to create new colonies on uninhabited planets. By colonizing planets with their own people, Luke's instructors hope to establish colonies loyal to peace, justice, and good will. Leia Organa comes to tour the new academy, and Luke is happy to show her around. He shows her a weapon called the Zukonium ray that has been modified so that it can be used as a power source. Luke's instructors hope to use it to power the colonies that will be created. Midway through the tour, an alarm sounds and Luke takes Leia to General Oleson's office. For unknown reasons, a maverick moon from a nearby system had been knocked out of orbit and was on a collision course with the planet. Luke proposes that he could destroy the moon with Zukonium rays, and he boards his X-wing, heading into orbit. Luke hears Ben Kenobi's words of encouragement, and he feels better about the upcoming challenge. Luke flies his spacecraft right next to the moon and fires Zukonium rays. The moon explodes, but Luke's craft is damaged, forcing an emergency landing. Luke saves the day, and Leia presents Luke with a medal of honor.

The time period of this story is unspecified. No mention is made of the Rebellion or the Empire, and the creation of a brand new flight academy and of new colonies implies the war is over. But a subtle romantic element is implied between Leia and Luke in this story (as it was printed before Luke and Leia were revealed to be siblings), and the story makes it clear that Luke's only training in the Force came from Ben Kenobi—and even that, Luke "had almost forgotten." The Academy has a complement of X-wings, but the text makes it clear that these are not in active use and that their condition is questionable. 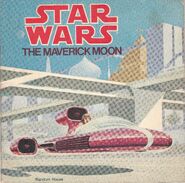 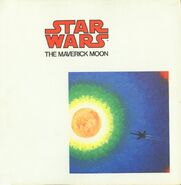 frontpiece
Add a photo to this gallery

In other languages
Retrieved from "https://starwars.fandom.com/wiki/The_Maverick_Moon?oldid=9262023"
Community content is available under CC-BY-SA unless otherwise noted.