Wookieepedia
Register
Don't have an account?
Sign In
Advertisement
in: Real-world articles, The Moviemaking Magic of Star Wars

9781419728198
The Moviemaking Magic of Star Wars: Creatures & Aliens is a behind-the-scenes reference book for younger readers. It is written by Mark Salisbury with the goal of teaching readers about the visual effects used to bring Star Wars creatures to life, and how the effects changed over time. It was released on May 25, 2018.

Go behind-the-scenes of the biggest movie franchise of all time in this immersive and interactive book to see how favorite characters—Chewbacca, Yoda, Jabba and more—were created from concept to screen. This collectible book includes 20 special interactive elements, including six-page booklets, accordion folds, and flaps that reveal the magic behind the movie with concept sketches, molds, digital imagery and more! Includes creatures and aliens from all 10 Star Wars films from A New Hope to Solo: A Star Wars Story![1]

On February 16, 2018,[4] it was announced that the book would come out on May 25 of that year,[5] coinciding with the release of Solo: A Star Wars Story, which the newest cover reflected.[4] 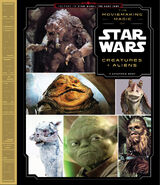 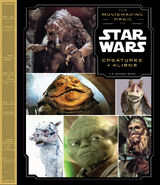 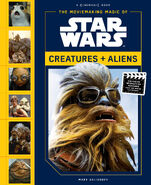