The Moviemaking Magic of
Star Wars: Ships and Battles

Journey to Star Wars: The Rise of Skywalker

The Moviemaking Magic of Star Wars: Ships and Battles is a canon reference book, covering behind the scenes materials regarding various battles throughout the franchise, as well as offering a sneak peek at some vehicles debuting in Star Wars: Episode IX The Rise of Skywalker. The book was published on December 17, 2019.

Go behind the scenes of the biggest movie franchise of all time in this immersive and interactive book to see how the most iconic vehicles in the galaxy—from the Millennium Falcon to X-wings and TIE fighters to AT-ATs and the Death Star—were created and used in the films of the Star Wars saga. This collectible book includes special interactive elements, including six-page booklets, accordion folds, and flaps that reveal the magic behind the movies with concept sketches, molds, digital imagery and more! Plus, get a sneak peek at some of the vehicles from Star Wars: The Rise of Skywalker! 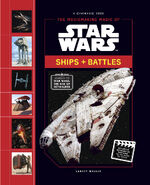 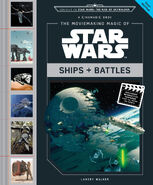 Wookieepedia has 1 image related to The Moviemaking Magic of Star Wars: Ships & Battles.

In other languages
Retrieved from "https://starwars.fandom.com/wiki/The_Moviemaking_Magic_of_Star_Wars:_Ships_%26_Battles?oldid=9086278"
Community content is available under CC-BY-SA unless otherwise noted.