The New Jedi Order: Force Heretic II: Refugee, the second book in the Force Heretic Trilogy, is a novel by Sean Williams and Shane Dix, published in 2003. It includes a preview of Shatterpoint.

In the Unknown Regions, Luke Skywalker, Mara Jade Skywalker, Jacen Solo, Danni Quee, Saba Sebatyne and Tekli, along with some help from the Imperial Remnant, have been searching for the living planet Zonama Sekot. Now traveling with the Imperial xenobiologist Soron Hegerty, the group arrive at the planet Munlali Mafir. Luke, Jacen, and a squad of stormtroopers land on the planet in an Imperial shuttle and are met by a tribe of native Krizlaw. Upon Luke’s request, the Krizlaw tell the travelers that Zonama Sekot visited their star system years ago and stayed for months during which great environmental disasters befell them. When Luke attempts to explain how the environmental issues befell them, the Krizlaw grow enraged and attack the Jedi and Imperials. Unable to effect the two minds of the Krizlaw with mind-tricks the group is forced to flee with the Krizlaw pursuit. During the retreat, Hegerty is severely wounded, requiring medical attention, all but one of the stromtroppers are killed and the remaining one was eaten by a Jostran, and the other members of the envoy mission manage to escape in their shuttle. En route back to the Jade Shadow, a patrol of the Chiss Expansionary Defense Force arrives to meet them. The patrol is led by the female Chiss Commander Irolia, who demanded to quickly meet with Luke. After a heated discussion in which Irolia questioned the motives of the Imperial/Jedi expedition, she gives them a disk with instructions to the planet Csilla where they need to be approved of being allowed within Chiss territory. They then travel to Csilla to find library records of where Zonama Sekot might be hiding now. But Luke and his company only have two days to look through the whole library to search for systems in the Unknown Regions that have gained any planets all of a sudden in the last fifty years. And along the way, Jacen meets and befriends Wynssa "Wyn" Fel, daughter of Soontir Fel and Syal Antilles Fel, and sister of Jagged Fel, all of whom are trusted allies of the Chiss. But when rogue Chiss who believe that Soontir is more of a danger to the Chiss because of allowing Luke and his company access to Chiss records, they try to kidnap Wyn. However, thanks to Jacen, Wyn is saved and Luke and the rest of his party manage to unveil the rogue Chiss to the Chiss High Council. Because of this, Luke and his company are granted an extended access into Chiss records for their search for Zonama Sekot. But Jacen begins to lose hope in finding Sekot until he guesses that the living planet might actually be hiding as a moon. The search party for the living planet take note of this and decide to look for systems that have actually gained moons in a quick amount of time in the past fifty years, and they estimate that Zonama Sekot must now be orbiting the gas giant Mobus. So Luke and his party depart Csilla and go to Mobus.

However, it turns out that Cundertol had actually betrayed the planet to the actual Ssi-ruuvi Imperium to be put into a human replica droid. Meanwhile, one of Cundertol's assistants, Blaine Harris, had also secretly been working with Malinza but would betray her by killing all of the important figures before the Keeramak completely consecrates the planet. Harris would do this by bombing certain areas of the arena where the consecration will take place in, including Cundertol's area. Elsewhere on Bakura, Jaina unwittingly breaks Malinza out of prison after hearing her side of the story concerning Cundertol's kidnapping. Jaina is brought by Malinza to her rebel group, but they are all betrayed and brought to Harris by Malinza's Rodian member, Salkeli. Meanwhile, Tahiri meets the next Ryn contact, Goure Conor, to help crack down Cundertol's betrayal. Tahiri, thanks to Han and Leia, learns that the inner conflict that had been bothering her since before she left with Jaina and everyone else from Mon Calamari was that it came from Riina Kwaad. Riina was the Yuuzhan Vong persona implanted by the late Master Shaper Mezhan Kwaad which had been suppressed thanks to help from the late Anakin Solo, who had been Tahiri's one true love and had died on the Mission to Myrkr to destroy the voxyn. Ever since Tahiri had moved on from grieving from Anakin's loss, her guilt over Anakin's death, and the guilt of moving on from it, dragged Riina back into her life. So Tahiri separates herself from Han and Leia and buries herself into cracking down Cundertol's betrayal with Goure. This all leads to Tahiri and Goure saving Jaina, Malinza and her rebel group and defeating Harris and Salkeli. But the bomb which will kill many in the arena will go off soon, so Tahiri heads off in a vain attempt to stop it. It explodes before she can deactivate it and Harris's plan succeeds, and Cundertol appears to be among the dead. Nevertheless, the Keeramak still consecrates the planet despite the bombing, and |the second Ssi-ruuvi invasion on Bakura begins. As it turns out, the P'w'eck were still the Ssi-ruuk's slaves. However, just as the Galactic Alliance are about to lose, the P'w'eck turn on the Ssi-ruuk and bring victory to the Alliance in the end. The Keeramak is also shot dead by his P'w'eck aide, Lwothin. Cundertol also reveals he is alive and executes Harris by shooting him, but his betrayal to Bakura with the Ssi-ruuvi is figured out so he tries to flee. After a brief fight with Jaina who unsuccessfully tries to stop him, he goes off and Jaina figures out that Cundertol was a Human Replica Droid, since she had cut off his arm with her lightsaber at the end of the fight. 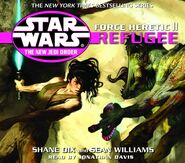 Japanese cover art
Add a photo to this gallery

In other languages
Retrieved from "https://starwars.fandom.com/wiki/The_New_Jedi_Order:_Force_Heretic_II:_Refugee?oldid=7453003"
Community content is available under CC-BY-SA unless otherwise noted.